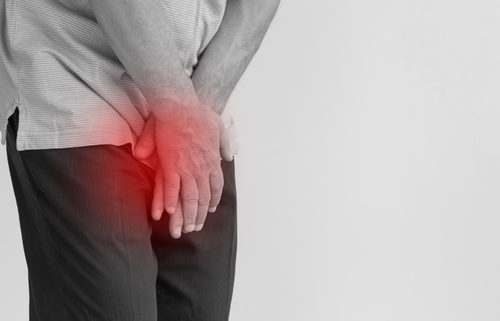 Thousands of men are diagnosed with prostatitis every year.  But guess what? Most of them don’t actually have it.

Maybe you’re one of those men, and you’ve been taking antibiotics for weeks because your doctor told you that’s what you had. How are your symptoms? Are they any better? And here’s an important question: Did your doctor get a culture to make sure there’s a bacterial infection in your prostate?

If you got a culture of your prostatic fluid, you would know it; it’s not like swabbing your throat looking for strep or taking a simple urine test.  No, checking the fluid that is inside the prostate begins with a rectal exam.  “We push on the prostate, fluid comes out the tip of the penis, and we capture this on a slide and look at it under the microscope,” says Sarah Flury, M.D., urologist at Northwestern University, one of the world’s experts on prostatitis and one of the experts we interviewed in the newest (2018) edition of our book on prostate cancer (prostatitis is NOT prostate cancer, but because it involves the prostate, that most troublesome gland, we put it in there).

If you didn’t have a culture of your prostatic fluid, but your doctor told you that you have prostatitis and put you on a powerful antibiotic like Ciprofloxacin, then it’s no wonder if your symptoms haven’t gotten any better. (Actually, taking a long course of antibiotics could even be bad for you; keep reading.)

Imagine if you had chest pain, and you went to the hospital, and the doctor in the Emergency Room said: “Chest pain? That’s a heart attack.” But in fact, your particular chest pain is because you have acid reflux – major backup of your stomach acid into the esophagus – and it hurts so bad that your esophagus is having a spasm. What you really need is a heavy-duty acid reducer or even a proton pump inhibitor, but instead you’re getting pumped full of blood thinners and expensive medicine to dissolve a nonexistent blood clot.

This is a terrible example, but it makes the point: In medicine, you can’t assume, and you can’t put people on medication that isn’t going to help them. If you don’t actually have prostatitis that is caused by bacteria, all the antibiotics in the world aren’t going to help you, and they may cause other serious problems.

And yet: “Bacterial Prostatitis itself is actually very rare,” says Flury.

Which begs the question, what is it? For the vast majority of men, “prostatitis” is just what the symptoms sound like: Chronic Pelvic Pain Syndrome (CPPS). But what’s causing the miserable symptoms in one man with CPPS might not be what’s causing them in another man. Everybody’s different, and you need to see a doctor who specializes in this, at a medical center where they see a lot of men with these symptoms and know how to treat them.

For example, in some men the cause of pain or tenderness in the scrotum or lower back is actually the pelvic floor muscles in spasm– like a hard muscle knot in the neck or back, except it’s close to the rectum. “There’s treatment for it,” says Flury, “specialized physical therapy, where they do a pressure point release.” Other men have bladder symptoms that are related to interstitial cystitis, which is the “irritable bowel” of the bladder, with muscle spasms. Some men with frequent or burning urination get better with Flomax or another drug in the category of “alpha blocker.” These drugs relax the muscles in the prostate and bladder and help relieve symptoms. Some men get better by changing their diet – because for them, spicy foods seem to set off the symptoms. Men who have difficulty or pain when urinating are often helped by biofeedback and physical therapy.

“Chronic pelvic pain is the broadest diagnosis,” says Flury. “It’s the base of the pyramid. Prostatitis is one of the diagnoses that can cause pelvic pain – not the other way around. Prostatitis is completely misunderstood and misused as a diagnosis. There are many different causes, and it is incredibly rare that it’s actually a bacterial infection in the prostate.”

So, if you have these symptoms, or if you’ve been told that you have prostatitis, what should you do?   “First, know that you’re not alone,” says Flury. “You have something real, but it’s quite possible that you’ve been given the wrong terminology for your diagnosis. CPPS is a heterogeneous syndrome; it’s not a specific disease, and ‘one size fits all’ doesn’t work. It’s a framework, and men have different symptoms within that framework: urinary symptoms, psychosocial symptoms like depression, muscular problems, neurological symptoms, organ-specific problems – in the penis, or testicles, or bladder, or prostate. All those things fit into CPPS.”

Flury is troubled by the number of men who have come to see her after another doctor told them, “You have prostatitis. Try these antibiotics for six weeks and see how you feel.” It’s not that easy. “People treated for six weeks on Cipro, without a diagnosis of infection? It’s terrible. You have to take a history. There may be 10 different causes for these symptoms, and 20 possible treatments.” Many of these men never even had a culture to confirm the diagnosis; they just got put on antibiotics.

It is worth it, Flury adds, to go to a center of excellence. She recommends that you start with this link: http://www.mappnetwork.org. There is a network of centers across the country, where physicians and scientists are doing research on the entire spectrum of CPPS. Even if you don’t want to participate in a clinical trial, physicians at those centers know how to figure out what’s actually causing your symptoms, and plan the treatment accordingly. “CPPS is a common condition, but many traditional therapies fail,” she says. Undoubtedly, that’s because the wrong thing is being treated. Find a doctor who can figure out what you really have. If you’ve been given a diagnosis of prostatitis, the first thing to do is to make sure you actually have it. If you have an infection, you need antibiotics, but if you don’t, you don’t need antibiotics. Many more men have CPPS than prostatitis.”

Antibiotics: There Are Risks

Some people have the idea that – because in the 1940s when they first came out, these truly were miracle drugs – everything’s better with antibiotics. But here’s why it’s not good to be put on six weeks of a powerful antibiotic if you don’t really need it:

In July 2016, the FDA issued a warning to doctors. It advised restricting the use of fluoroquinolone antibiotics for certain uncomplicated infections – because the “serious side effects … generally outweigh the benefits for patients.” People with some conditions – such as sinusitis, bronchitis, and a simple urinary tract infection – have other options; there are lots of antibiotics that treat those problems. However, men with acute or chronic bacterial prostatitis don’t have as many other choices, so for them, the risks of fluoroquinolones are probably worth it.

But you sure don’t want to be taking these drugs if you don’t need them – and if you haven’t even had a proper culture to determine if you even have an infection.

“An FDA safety review has shown that fluoroquinolones, when used systemically… are associated with disabling and potentially permanent serious side effects that can occur together. These side effects can involve the tendons, muscles, joints, nerves, and central nervous system.” Some of these side effects include “tendon, joint and muscle pain, a ‘pins and needles’ tingling or pricking sensation, confusion, and hallucinations. Patients should talk with your health care professional if you have any questions or concerns.”

What if You Actually Do Have Bacterial Prostatitis?

No getting around it: if you do have bacteria-caused prostatitis, you need to take antibiotics for six weeks.

Acute Bacterial Prostatitis. If you have this, you know it, because it’s debilitating – so much so, that you are probably reading this in the hospital. You most likely also have a fever, chills, and extreme pain. This is not the time to be a macho man and suffer through it. You need immediate treatment. Go to the doctor or, after hours, an emergency center.   This is very important: If you have acute bacterial prostatitis and you don’t get help right away, you could develop a life-threatening infection in the blood (called sepsis), or not be able to urinate (urinary retention, which requires a temporary catheter), or develop an abscess within the prostate (an infected area of pus under pressure; as you can imagine, this is very painful).

“Acute bacterial prostatitis is an infection that can have very severe symptoms,” says New York University urologist Stacy Loeb, M.D. “It requires immediate treatment with antibiotics. It is also one of the potential risks of a prostate biopsy: this is why all men who undergo a prostate biopsy require antibiotics before and after to reduce the risk of a symptomatic urinary tract infection – and acute bacterial prostatitis is really an acute urinary tract infection. In fact, recent studies show that acute prostatitis after a biopsy can be more severe than other cases.”

The good news is that once you start taking antibiotics – usually in the category called fluoroquinolones; an example is Ciprofloxacin – you will start to feel better fairly quickly. The thing is, you will need to stay on antibiotics much longer than you might expect. If you just take a course of antibiotics for a week to 10 days and then stop, and even a tiny amount of infection remains in the prostate, guess what? It is likely that the prostatitis will come back – this time as a chronic infection, which is harder to get rid of.   If you have an episode of acute bacterial prostatitis, then, you should stay on antibiotics for about six weeks. Be steadfast with the antibiotics and wipe it out the first time. You don’t want to go through this ever again if you can help it.

More about prostatitis and much more about prostate cancer are on the Prostate Cancer Foundation’s website, pcf.org. The stories I’ve written are under the categories, “Understanding Prostate Cancer,” and “For Patients.”  As Patrick Walsh and I have said for years in our books, Knowledge is power: Saving your life may start with you going to the doctor, and knowing the right questions to ask. I hope all men will put prostate cancer on their radar. Get a baseline PSA blood test in your early 40s, and if you are of African descent, or if cancer and/or prostate cancer runs in your family, you need to be screened for the disease. Many doctors don’t do this, so it’s up to you to ask for it.

Exercise and Cancer: What Your Prostate Thinks
Scroll to top