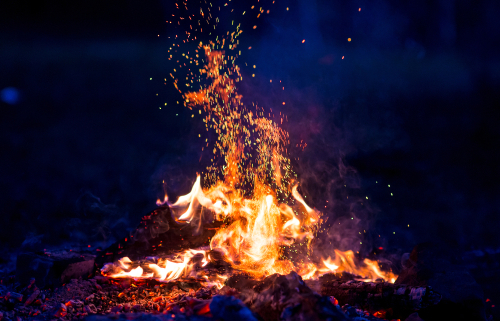 Believe it or not, there once was a time when the Grand Canyon was just a ditch.  Before that, it was a rough patch in the desert with a river running through it.  It took a very long time for that canyon to form, and the conditions had to be just right to allow water, blazing sun and wind to chip away through layers of fragile rock.

On a very much smaller scale, this is what happens to cause cancer when the conditions are just right.

Now, if you will:  While we’re thinking about the Grand Canyon, let’s pan the camera a few miles away. We’re near some tall pine trees, and there’s a campfire.  Some cowboys are sitting around it.  Let’s imagine that they all have white hats; they’re good guys.  (They’re also much quieter than the cowboys around the campfire in “Blazing Saddles,” so don’t go there!)

If you’ve ever sat around a fire, you know that wood sometimes pops unexpectedly and sends out sparks.  That’s exactly what happens at our little campfire, and it happens to hit one of the cowboys square on the arm.  He brushes out the sparks, then goes back to his seat.  Nothing’s really changed; he laughs it off.

Wouldn’t you know it, the fire sparks up again – right on that same poor guy.  This time, he’s a little more scorched; his shirt has a hole in it and his eyebrows got singed.  He’s also a little irritated.

It happens a few more times, and he is no longer the proverbial happy camper.  He’s moving around, no longer sitting quietly, he’s got some burns that will leave scars, and he’s angry.  His hat is so charred now that it’s almost black.  One last spark, and he’s out of there.  He leaves the campfire, saddles up his horse, and rides away, fighting mad and looking for trouble.

This little scene plays out a lot, every day, in our bodies.  There are countless campfires – like stars dotting the sky – that flare up, burn quietly, get snuffed out, and never cause harm.  The campfires are little flares of inflammation.

Commenting on this analogy is medical oncologist and molecular biologist Jonathan Simons, M.D., CEO of the Prostate Cancer Foundation.  “The future of fighting prostate cancer,” he says, “is either to stop the sparks from flying, or to put fire retardant on the flames – or better yet, to bring in the fire retardant really early in life.  It’s all about the sparks, and what makes the sparks, and then spark interception or spark interdiction.”

Expect to Hear a Lot More About Inflammation

Inflammation is our own version of Dr. Jekyll and Mr. Hyde: When it works the way it’s supposed to – when you skin your knee or get a paper cut on your finger, for instance – inflammation is what protects your body from bacteria and germs that find their way through the open wound.  The immune system kicks in; zealous home soldiers like killer T cells spray chemicals on the intruders, puncture their armor, or even eat them whole.  You notice some redness, a little heat, maybe some swelling or even a bruise, and you know that your body is healing.  There’s a scab, new skin covering the hole or tear, and all is well. The inflammation goes away.

But what if it doesn’t go away?   Here’s where the dark side of Dr. Jekyll, his alter ego Mr. Hyde, starts to show itself.  Chronic inflammation is bad.

“The story of inflammation is absolutely the heart of what causes prostate cancer,” says Simons.  “Inflammation lowers your defenses,” and changes the DNA.  Going back to the angry cowboy at our campfire scene: If only he had moved away from the fire, or if someone had poured a little water on the fire to cool it down and keep the flames low.  He might have had a few scars, but he would have been okay.  Instead, he began moving around, and eventually he left the campsite; if he were a prostate cell, he would have become cancerous – but still there at the site, still easily treatable.   But as he became more scorched, he became metastatic.  The continued exposure to those flames turned him from a cell sitting quietly into a metastatic cancer cell.

“We estimate that 30 percent of all cancers are caused by this kind of chemistry,” Simons adds.  The little fires hurt genes that are nature’s own tiny fire retardants, so without their subduing effect the flames burn hotter; the fires then go after the body’s normal first responders.  So the firefighters don’t stop the burning; the paramedics don’t heal the injured victims.  The inflammation draws other cells called macrophages and granulocytes to the scene; they’re supposed to be part of the body’s cleanup crew.  “Unfortunately, in cleaning up, they actually make the flames burn hotter and further damage the area.”

What causes the fires?

One huge cause is our diet.  Fat, charred meat, processed carbohydrates, chemicals in junk food, and sugar.  Basically, what we know as the Western diet – high in meat and bad carbs, low in fruits and vegetables.   How do we know this?  Because the men in the entire world least likely to get prostate cancer are men in rural Asia, who eat the traditional Eastern diet – low in meat, high in fruits and vegetables, with hardly any processed carbs.  No soda, lots of green tea.  No fries, lots of rice.  No burgers, lots of broccoli.  But when those men come to America, their risk of getting prostate cancer goes up.  Diet matters.

“The rural Asian diet is anti-inflammatory,” says Simons.  “It may be that these men would eventually develop prostate cancer if they lived to be 120.  But they don’t.”  If you think about our campfire analogy, maybe cells still get singed, but they’re few and far between.  That critical momentum never develops.

“We are now learning that it’s essential for men to have a healthy diet when they’re young – say, between 14 and 30.”  But men of any age can benefit from turning down the inflammation with “fire-fighting” foods.

The opposite is also true:  Obesity and one of its consequences, diabetes, make these flames burn even higher.   (In fact, this may be one reason why rural Asian men are less likely to get prostate cancer: because of their diet, they have a lower body mass index, which means less stress on their cells.) “If you are overweight or borderline diabetic, you turn on more insulin to try to control your blood sugar,” says Simons.  Insulin secretes molecules called cytokines, which – thinking of our cowboys at the campfire – are like the chuck wagon, bringing in oxygen, new blood vessels and nutrients to feed the cancer.

“Some men have more sparks flying around, and men who are overweight are in this group.  The good news is that you can reduce your insulin level with exercise,” says Simons.  “There’s a lot of evidence that just being sedentary is a terrible setup for trouble later, if you have a slightly inflamed prostate and higher insulin level.”

The prostate is particularly vulnerable to inflammation, Simons adds, because it’s just chock full of inflammatory cells called prostaglandins, most likely nature’s way of protecting the fluid that makes up semen.  So the prostate is already a tinder box.

What else makes it worse?  A big one is genetics.  Some men are born with  their own fire-starter – genes they inherited from their father or mother.  If you are of African descent, or if you have a family history of prostate cancer or cancer in general, you are at higher risk of developing prostate cancer.  That doesn’t mean that you’re bound to get it, and it may be that with cancer-fighting diet, exercise, not smoking, and plain old good luck that you will never have prostate cancer.

Other causes of sparks:  Infection.   Cigarette smoking.  Emotional stress.  Not being circumcised: several stories have shown that circumcision has a protective effect, lowering your odds of developing prostate cancer, and of dying from it.  This ties in with what we’re still just learning about the role infection plays in changing the prostate’s microenvironment, and making it more susceptible to cancer.

Okay, then what puts out the fires?

We’re still figuring this out.  A good diet, exercise, and other flame retardants such as Vitamin D.  Dietary supplements such as turmeric seem to help, as do broccoli and tomatoes cooked in olive oil (which brings out the lycopenes).  Meditation: new research suggests that this may help calm the tiny sparks and lower the chances of cancer catching fire.

And finally, there’s a huge question mark. What else helps?  “This area of research is woefully underfunded,” says Simons. There may be a bacterial equivalent of H.pylori– the nasty bacteria found to cause stomach ulcers.   New research suggests that probiotics – “good” bacteria that change the microflora in the gut – may prove helpful in preventing cancer.  Does this mean that there are bad bacteria that do their share of causing it?  Could this be related to the link between infection and inflammation?