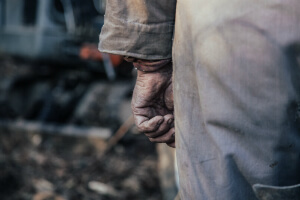 I may not know you personally, but I know that, because you’re a man, chances are good that you do two things. One, you most likely respond to health issues with denial. I can relate to this – I do it, too.

And two, when things get tough, you just put your head down and keep going. You work harder, trying to take care of your family and not let anyone down at your job. Trust me on this, because I know and love the men in my family who do these same things:

[Tweet “You need a vacation. Time off. Relaxation. Your body needs it.”]

A famous neurosurgeon in Baltimore, when he used to interview residents, would ask them to show him something they had made with their hands. He did this because he knew how demanding the job was, how much pressure there was, and that being able to relax and take the time to tinker, or play a musical instrument, or whittle, or work on a car, not only calms you down and boosts your mental health, it can help you live longer and keep you healthier. A study from the Mind-Body Center at the University of Pittsburgh, of nearly 1,400 people who were taking part in other health studies, found that people who had more leisure activities had more satisfaction in life, found more meaning, were more spiritual, and basically just more positive in general. And that’s just down time, which we all need. But we also need to kick it up a notch and take actual vacations.

The Framingham Heart Study is a long-term study, started in 1948 in Framingham, Massachusetts, by what’s now the National Heart, Lung and Blood Institute. Over the years, they have followed thousands of participants, three generations of families who come back every two years for laboratory tests, a history and physical. Among their many important findings over the years was this one, from a study that looked at the effects of vacations in more than 12,000 men over a nine-year period. Men who didn‘ t take vacations for several years had a 21-percent higher likelihood of dying, and were 32 percent more likely to have a heart attack than men who got away from work for at least one week a year. There was a definitive link between taking vacations and living longer, and staying healthier. The more vacations a man took, the longer he lived. Not taking a vacation doesn’t mean that you are going to have a heart attack, but it does mean that your risk of having one is most likely going up a little bit.

Does this mean you need to spend a lot of money to go on a cruise, or stay in a fancy hotel? Heck, no! But it does mean that you need to shut off the working guy for a few days, ideally a week, and be the relaxing guy. Resist the urge to check your work e-mail and phone messages! Resist it as if your life depends on it. Go fishing. Read a book. Wander around a museum, if that floats your boat. Or float in a real-life boat! Go to the movies, take a hike, play golf, go see a baseball game. Lie on a blanket and watch the clouds roll by. Whatever you do, do something you enjoy, and do it for several days straight. You have to break the cycle of lifestyle stress – commuting to work, being stressed at work, being stressed when you come home at family issues and all the things you need to do around the house, not
sleeping well – at least once a year.

We’ll talk more about stress in future posts, but when you get stressed, among other bad things that happen, your body makes a hormone called cortisol. Cortisol sucks. It ages you faster, and also makes your waistline thicker. When our ancestors were running away from mammoths or something equally horrible, their bodies produced cortisol and adrenaline. We still do, too. The adrenaline fades, but the cortisol makes our bodies think, as our Stone Age ancestors might have, “Maybe there’ll be no more food! I’d better eat while I can!” And when we eat in this situation, that weight tends to stay right in the worst possible place for heart attack risk – the belly.

When you come back from your vacation, chances are good that you will be more productive and that you’ll have a mental cushion that will protect you from burnout. Even if you get all stressed out the minute you walk back in the office and see 500 e-mails and a big pile of work. Don‘t worry, that‘ s okay! You will have that cushion, and it will protect you, even if the glow of vacation is fading faster than the poster of Farrah Fawcett that used to hang up in your bedroom when you were a kid. Look at it this way: Say you have a great night’s sleep. You’re going to get tired again the next day, but that doesn’t mean that your body didn’t benefit from the good, healing sleep you had. It’s like recharging a battery. It’s money in the bank.

We Americans are mostly bad at taking vacations. In Europe, many employers give at least three weeks, and in France, many people take off for an entire month. In America, if we’re lucky, we get maybe two weeks, and one study done by the Families and Work Institute found that fewer than half of us use all of our allotted vacation days. Working parents, for instance, hoard them, so they can be there for their kids if they are sick. I’ve done it, and I can tell you that, although it’s a blessing to be there for your child, that’s not a vacation!

I would add that, when you plan your trip, don’t try to do too much. Ambition here is not what you need. Also, if you have a job that just won‘t give you a whole week off at once, you can still help your body and mind by taking more breaks, a weekend here and there.

Finally, I would like to leave you with the very sad case of Li Yuan, a Chinese advertising executive who died of a heart attack at age 24. For the entire month before he died, he had been staying late at the office, working until nearly midnight. A report from China said that more than 600,000 workers in that country die of exhaustion every year. That is just so wrong. Don’t be that guy. Take care of yourself.

Goof Off, and Put Down the Phone
0 replies