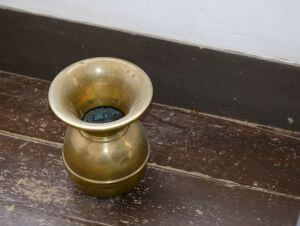 If you use smokeless tobacco, or know a guy who does and want to help him, this is for you.  Obviously, the best thing you can do is quit.  But if you can’t do that, these three words may save your life:  Move your chaw!

I’ll explain, with help from Jason Campbell, D.D.S., a Prescott, Arizona, dental surgeon who specializes in complex reconstructions.  (Note: Campbell is also a very nice guy, and he says if you have any questions about what we’re talking about in this story, contact him at frontoffice@myprescottdentist.com and he will answer them.)

When you stick a plug of tobacco in your mouth, it begins to break down, or denature, the tissue it touches.  It doesn’t just alter the tissue but the genetic code, as well, and this can lead to cancer.  By habit, says Campbell, “guys typically tend to keep the tobacco in the same spot all the time. “ The repeated chemical attack, of denaturant leaking out of a chaw of tobacco day after day, causes the body’s immune system to launch defensive countermeasures.   “The body’s way of protecting the tissue is, it toughens it up and thickens it, like when you get callouses on your hands from shoveling or lifting weights.  We see that wherever that tobacco goes.”  The official diagnosis of this phenomenon is called “tobacco pouch keratosis.”  (It’s gross.  Google it.)

Tobacco pouch keratosis is a precancerous condition.  “When the body starts laying excessive tissue down in order to protect itself, when those immune system cells get turned on, the body is automatically activating a system for cell formation.”  Cancer, Campbell points out, “is the continuous growth of tissue.  If the chemicals in tobacco alter the normal process, this system can get turned on and never turned off, and that’s when cancer can form.”  Usually, Campbell sees this keratosis on the lip and gum, but it’s kind of a tip-of-the-iceberg situation.  “Some of the fallout is, it creates inflammation in the area.  Periodontal bone loss is a process of inflammation, and that inflammation can cause a receding gum line, because it damages the bone, and then the gum follows the bone.  So periodontal defects are also very common in people who hold their tobacco in the same place over and over. “

If you smoke instead of chew, don’t feel too smug: The heat from a cigarette or cigar damages tissue, as well, and hampers the immune system in that area.  “So the heat is a problem, but the chemicals in smoked tobacco also inhibit the immune system,” says Campbell.  “Consider that the mouth is a pretty dirty environment.  A lot of different bacteria live there, and if the immune system is suppressed, it’s going to increase someone’s risk for bacteria-induced gum disease, as well as bacteria-caused tooth decay.”  (Another downside of smoking tobacco is that it messes up the taste buds; food doesn’t taste as good, and this suppresses the appetite – which is why you might see super-thin models and actresses puffing on cigarettes.  When people quit smoking, food starts to taste better.)

Good news: the damage to the lip and gum is “100 percent reversible when tobacco products are discontinued.”  In the mouth, there is “a constant turnover rate of tissue replacement,” Campbell says.  “When the tissue detects that it doesn’t need to protect itself, that over-reactive thickening stops.  Usually that tissue can rebound.”  Periodontal damage, and damage from bone loss, can be corrected with surgery.

If you can’t quit chewing tobacco, there is still good news:  “I encourage our patients, if they are unwilling to quit, to move it.  My job as their dentist is to help them avoid big problems.  I’d much rather have them move it than increase their risk for cancer.”  For example:  If you generally keep your chaw tucked away on the right side of your mouth, put it on the left.

Campbell knows that for a lot of people, this means, “I just reduced my risk for cancer.  It’s okay for me to continue to chew!”  So, just because you can minimize your risk of cancer by moving your chaw, don’t think that’s one more reason why you shouldn’t quit.  “But one upside is, seeing that tissue heal does bring peace of mind for people.” It doesn’t happen right away, but “in six to eight months, we usually see that kind of leathery tissue start to dissipate.  In the tissue where there is receding of the gum, almost instantly we see the inflammation go down.  The gum is usually red and inflamed there, and that will heal very quickly.”

Keep in mind, Campbell notes, that tooth decay and gum disease are bigger oral health worries than the risks of cancer when it comes to smoking or chewing tobacco – and quitting reduces your risk for having to get cavities fixed, having your teeth go bad and needing crowns, or needing to have gum surgery.  “People need to understand that their risk of developing oral cancer is low.  But their chance of survival is very low.”  The mouth has a lot of blood flow – blood that can take cancer elsewhere, allowing it to metastasize.  People who get oral cancer from tobacco may need to have part of their face removed, or may risk having that cancer spread to other parts of the body.   I wouldn’t wish that on anyone.

Rinse Tests for Oral Cancer:  “We’re getting better at detecting oral cancer,” says Campbell.  Most dentists now check your mouth and throat very carefully for tissue changes, and at many practices, you can request a diagnostic test for oral cancer – a fluorescent rinse that bonds with precancerous cells, causing them to glow or stand out when the dentist shines a light on them.  These tests look for abnormal tissue, and aren’t just limited to changes caused by tobacco.  They can also detect other oral cancers, such as those caused by HPV.

Prostate Cancer Screening and You
Scroll to top