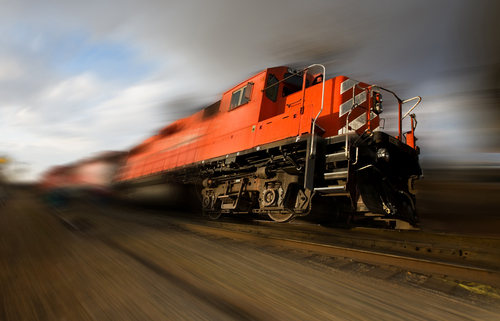 This is part of On the Horizon:  a series written with the sole purpose of sharing hope:  showing you some of the new treatments that are being developed to fight cancer that has defied everything else.  Because I write for the Prostate Cancer Foundation’s website, I get to interview scientists developing highly promising treatments that aren’t widely available yet, but they’re in the works.  Salma Kaochar, of Baylor College of Medicine, is one of these scientists.

How do you stop a runaway train?  Take a few seconds and think about it; feel free to draw from any runaway-themed movies you might have seen.

Well, you could go after the track: rip it up: a train can’t go very far without a track.  Get rid of its fuel:  this was an idea in “Air Force One,” where Harrison Ford dumped jet fuel in mid-air.  Slow it down:  in “Unstoppable,” Denzel Washington and Chris Pine tried to halt a runaway by pulling it from behind with another engine. This didn’t work for very long; next, they tried to engage the brakes – first on the individual cars, and then on the main engine.  Blow it up: If you didn’t really care about innocent bystanders or collateral damage, you could just take a rocket-powered grenade or heat-seeking missile and try to destroy the runaway engine… if you happened to have such a weapon, if you knew how to use it – and if, of course, this weapon actually works like you hope it will.

Metastatic prostate cancer is like a runaway train. Every day, scientists are getting closer to stopping it, with a drug or treatment that targets one of cancer’s weak spots.  Cut off its fuel:  That’s the reason for ADT (androgen deprivation therapy), shutting down testosterone and other androgens (male hormones) that drive the cancer; and also for androgen receptor-blockers, drugs like abiraterone and enzalutamide.  Hinder its ability to grow:  that’s the purpose of chemotherapy, and of drugs that target angiogenesis – like the tracks for the train, there are pathways cancer needs before it can get rolling.  But these types of drugs often don’t work for long.

Wouldn’t it be nice to target several of these ideas at once?  Not an either-or situation, but a “this mechanism and this one, too, and also this one.”

That has been the dream.  What could be even better?  A drug that would not mess with the male hormones; something that would enable men to keep their testosterone and prevent the side effects of ADT.

We may have found one.  It’s preliminary, and probably two years away from clinical trials, but Salma Kaochar, Ph.D., Nicholas Mitsiades, M.D., Ph.D., and colleagues at Baylor College of Medicine seem to have found a promising new strategy that rips up the track, and dumps the jet fuel, and turns on the brakes – and causes, at least in mice, no collateral damage.

It shortstops prostate cancer at the protein level and at the same time, turns up the immune system – in a way unlike any form of immunotherapy currently available– and doesn’t affect testosterone at all.

“We are developing a first-in-field approach to target the previously undruggable family of cancer-promoting genes for the treatment of both androgen receptor-dependent and androgen receptor-independent castrate-resistant prostate cancer (CRPC),” says Kaochar.  She presented her findings at the 2018 Scientific Retreat of the Prostate Cancer Foundation.

What is this secret weapon, and how does it work?  If we continue with our movie analogies – and pardon me for doing so, but otherwise this stuff is hard to explain – then it’s like that scene in “Raiders of the Lost Ark,” where Indiana Jones, faced with a fearsome, sword-wielding assailant, pulls out a pistol and shoots him.  He doesn’t try to out-fence a master swordsman.   He changes the game.

Kaochar and colleagues have found a potential game-changer, a target that no one has ever tried in cancer before: p160 SRCs, or “steroid receptor coactivators.”  These are “master regulators of transcription factor (key proteins) activity necessary for cancer cell proliferation, survival, metabolism, cell motility, invasion and metastasis,” she explains.  “In prostate cancer, they are required for the function of the androgen receptor and its variants.”

Transcription factors are proteins that act as a key to turn on a gene – just like a key in the ignition of a car.  Except here, if you have more keys, you can make the engine go faster.   “In CRPC, there is frequent overactivation of p160 SRCs,” Kaochar continues. “This results in increased androgen receptor activity, faster growth of the prostate cancer cell (more powerful and determined cancer cells), resistance to therapy, and bad outcomes.  Increased levels of these SRCs are associated with very poor prognosis.  SRCs are also important for the energy homeostasis (energy balance) in prostate cancer.”

The most deadly prostate cancers are addicted to SRCs.  They’re like crack for cancer.

But guess what?  “SRCs can be reprogrammed.  They can be suppressed.”  And this can happen in localized tumors as well as in metastatic cancer.  Theoretically, there is no point in cancer at which this couldn’t start to work.  “Our goal is to find something to hit cancer at that late stage, where there’s absolutely no other treatment, where it’s all over, everywhere.”

In mice, Kaochar and colleagues are using “pulses” of treatment, not one continuous treatment.  Each pulse shuts down all the machinery cancer needs to grow, and also energizes the body’s immune system to fight the cancer.

Overactivation of SRCs appears to be extremely common in prostate cancer, and in other forms of cancer, as well.  So far, in laboratory tests using various types of aggressive, hormone- and chemotherapy-resistant prostate cancer cells (because men with prostate cancer don’t all have the same genetic mutations), 100 percent of prostate cancer cell lines tested in a dish have tested positive (see below) as being driven by SRC.

“These p160 SRC molecules are important in many cancers,” Kaochar says, “including uveal melanoma,” a particularly nasty form of melanoma that attacks the eye. “Uveal melanoma is a hormone-independent cancer, and it is heavily addicted to these molecules.”  Not only is uveal melanoma deadly; it is an “orphan disease,” rare, and lacking big financial support for research.  Kaochar’s research, funded by the Prostate Cancer Foundation, may lead to the first effective treatment for this disease, too.

Could Controlling Metastatic Cancer Really Be Just a Matter of Tweaking?

If you’re a certain age – old enough to remember life before digital TVs – you probably know a lot about the fine art of tweaking.  If your picture was fuzzy, there were lots of ways to fiddle with the TV to try to fine-tune it.  There was the antenna, of course; actually, there were two, one up on the roof, and the rabbit ears on the TV set itself.  Then there were the knobs:  color, contrast, brightness, horizontal and vertical control.  It took a lot of trial and error, but tweaking was the key to a better picture.

Could controlling cancer be anywhere near that simple?  Well, in practice, it’s a heck of a lot more difficult, but the idea may be that simple:  tweaking the cancer cells, and also fine-tuning the normal cells.

Salma Kaochar and colleagues at Baylor are really developing several things at once: One is a sophisticated test to see if a man’s prostate cancer – and, quite possibly, anyone’s melanoma, breast cancer, pancreatic cancer, glioblastoma, ovarian cancer, etc. – is controlled by SRCs, which do various biological things, ranging from housekeeping chores like DNA repair, to controlling the metabolism, to controlling various proteins and driving cancer cell growth.  She is working on a simple test that works like a stoplight:  green means positive, yellow means maybe, and red means no. But the thing is, cancer might test red today, but as it continues to mutate and become more dangerous, it might test green in a few months.

So far, 100 percent of the various prostate cancer and other cancer cell lines Kaochar has tested – in RNA sequencing and tests of more than 1,000 different genes – have come back green.  “More than 92 percent of the genome is coded by SRCs,” says Kaochar. “In prostate cancer and breast cancer, we have seen the same thing, and we believe it’s true in multiple different cancers.”

In cancer cells in a dish, “SRC 160 looks like a real vulnerability,” says Kaochar.  Jonathan Simons, M.D., medical oncologist and molecular biologist, and CEO of the Prostate Cancer Foundation, which has funded this work, describes it as “hitting the carotid artery.  If it works, it would be a stopper.”

But, “the more we learn, the more complicated the story gets,” Kaochar cautions.  “It’s exciting to have something that does so many things and has so much promise.  But at the same time, we have to carefully examine everything, and make sure there is no toxic effect.  That’s the spectrum where we’re really focused right now.”

Because this is first-in-field – a whole new class of drug – it will require a lot more testing before it can be tried in humans. Starting with cell cultures, then mice, then rats, then larger mammals.  “We just don’t know what their off-tumor effect,” on normal cells that are just minding their own business, “would be.”

Kaochar’s idea is that this drug would tweak the body: turn down SRC function in cancer – slowing down cancer cell growth, and also shutting down the cancer’s drive to metastasize – but also turn up the immune system at the same time, so the body can fight off the cancer.

Your Gums and the Risk of Alzheimer’s