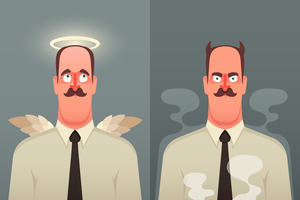 Why has the COVID-19 virus killed many more men than women?  What does the virus have to do with male hormones?  Well, quite a lot, it turns out, and a lot of what scientists now know about this male hormone (androgen)-virus interaction comes from scientists studying prostate cancer.  Scientists whose research happens to have been funded by the Prostate Cancer Foundation (PCF).

Suddenly, the genetics of prostate cancer have also become the key to finding new treatments for this terrible coronavirus.  I write for the PCF’s website, so I’ve been lucky enough to learn about some of this research from the scientists first-hand.

It all has to do with genes and proteins:  That’s how the virus sneaks into the nose, throat and lungs, and does its evil work; how it enters the cells in the airway and starts reproducing like crazy, causing the cells to burst open.  The explosion of respiratory cells causes terrible inflammation, swelling, and congestion.  Worse, oxygen can’t get into the bloodstream.  This devastation can result in a ventilator in the ICU, or in death.

Think of this nasty virus as a con man who looks normal – like Fred MacMurray as Steve Douglas, the beloved dad in “My Three Sons.”  He seems benign, and he walks right into your house through your front door.  But oh, no! It’s actually Fred MacMurray as Walter Neff, the murderous insurance salesman in the iconic film noir, Double Indemnity!  By the time you realize he’s a bad guy, it’s too late! You’re in trouble.

COVID-19 does the same thing.  It attaches itself to a certain receptor called ACE2, which then tells cells, “This guy’s legit.  Let him in.”  ACE2 is the doorknob; that’s how the virus enters cells in the nose, airway and lung.

What does this have to do with prostate cancer?  The specific gene that makes it possible for the virus to grab onto ACE2 and keep entering and killing respiratory cells is called TMPRSS2.  PCF-funded scientists have studied this gene extensively in prostate cancer since 1988.  They know, from 32 years of research, what controls the TMPRSS2 gene that unlocks the receptor that lets in the virus:  androgens (male hormones).  TMPRSS2 is an androgen receptor-controlled gene.

Scientists believe they can stop the virus’s attack on the body by targeting TMPRSS2.

“In about half of all prostate cancer patients, TMPRSS2 is involved in a genetic event that can drive prostate cancer,” PCF-funded investigator Matthew Rettig, M.D., told me in a recent interview.  Rettig is a medical oncologist at UCLA and Chief of Hematology and Oncology at the VA Greater Los Angeles Healthcare System.  “The gene is tightly regulated by male hormones in prostate cancer.”  Male hormones, primarily testosterone, activate the androgen receptor and cause more TMRPRSS2 to be available on the surface of cells for the virus to enter.  “The question is, does TMPRSS2 in lung tissue behave in the same fashion as it does in prostate tissue?  We have good, correlative evidence that it does.

One way to do it is to shut down testosterone for a few weeks (being tested in TMPRSS2-targeted clinical trials discussed here, midway down the article).  “It turns out that if you suppress male hormones, that will suppress the production of the receptor,” Rettig says.  Basically, explains medical oncologist and molecular biologist Jonathan Simons, M.D., CEO of the PCF, “if you suppress male hormones, you reduce the total number of door handles the SARS virus can use to enter.”  Imagine evil, Double Indemnity Fred MacMurray, trying to get into the car where he commits the murder; there were no power door locks, so as he gets to each door, you push the lock down:  one, two, three, four!  You locked him out!

“Conversely,” says Rettig, “if you add male hormones to lung tissue, it will increase the expression of the receptor.  There is a lot of molecular/biochemical/scientific evidence that supports this concept: that the receptor for the virus is regulated in at least a similar manner in lung tissue as it is in prostate cancer tissue.”

Rettig continues:  “It is not a stretch for someone doing prostate cancer research to immediately see this connection and say, ‘Why don’t we temporarily suppress male hormones,” with available, FDA-approved drugs, “in male patients who are suffering from COVID-19, to see if we can immediately ameliorate the severity of the illness?’”

Don’t women have at least a small amount of testosterone?  “Yes,” notes Simons, “but while thousands of women have been infected, men are still more likely to become infected and die from COVID-19.”  Rettig adds:  “A striking study just reported that a huge proportion of women test positive who have no symptoms.  We think they actually may be protected by a combination of low androgens and high estrogen.  Work done by some of our colleagues at Columbia suggests that female hormones – estrogen and estrodiol – actually suppress the expression of the receptor.”  Then why not give estrogen to men?  “It does seem to suppress the receptor, but when it’s first given, in the first few hours,” there’s a temporary backlash, “a transient rise in the expression of the receptor that could make the disease more severe.”

This begs another question, and the answer has changed since I first interviewed Rettig a few weeks ago.  I asked him:  If shutting down the male hormones can stop the virus from invading the lungs, are men who are on androgen deprivation therapy (ADT) for prostate cancer protected?  He said, “Nobody knows yet.”  And that was true.  But since that time, another PCF-funded study of men with prostate cancer in Italy found that men who were on ADT were four times less likely to be infected with the coronavirus than men who were not on ADT, and five times less likely to die.  You can read about that here. And another approach, also being tested in clinical trials, involves a drug used in Japan to treat pancreatitis.  It is also a TMPRSS2-blocker.

It is amazing that in a matter of weeks, scientists have learned so much about this virus, including good potential avenues for treating it.