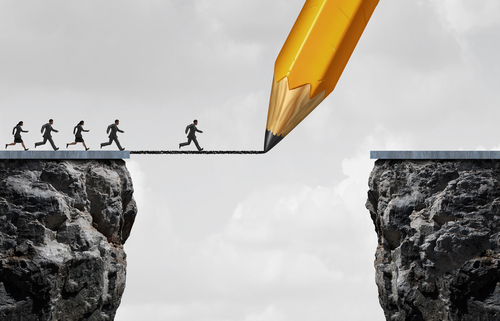 A full-on assault of high-risk prostate cancer with intensive neoadjuvant hormonal therapy before surgery marks a huge shift in medical thinking.  Instead of doing things in a well-ordered sequence, oncologists like UCSD’s Rana McKay are launching many weapons earlier than ever, when cancer is less prepared for battle, and they’re going for a cure.

Why the No-Holds-Barred Approach Now?

Which scenario would you prefer:  “I’ve got high-risk prostate cancer.  I sure hope it doesn’t come back after surgery or radiation!  Fingers crossed!  My doctor and I are really hoping for the best!” or,

“I’ve got high-risk prostate cancer that has a chance of coming back after initial treatment.  So, my doctor is going after it relentlessly, like Inspector Javert hunting Jean Valjean in Les Mis.”

High-risk prostate cancer is formidable: it will spread if not treated and is more likely to recur after initial treatment.  That’s why doctors like Rana McKay, M.D., medical oncologist and PCF-funded Young Investigator at the University of California San Diego (UCSD) are now throwing the proverbial kitchen sink at high-risk prostate cancer as soon as it is diagnosed.

This marks a huge shift in medical thinking.  Advanced prostate cancer treatment in the past has been like a methodical series of “if: then” statements in math, like, “If A, then B,” or “C if and only if B.”  If cancer spreads beyond the prostate, then the traditional next step has been androgen deprivation therapy (ADT), shutting down testosterone and other male hormones that drive prostate cancer’s growth.  If the cancer becomes resistant to ADT, then other medications are added: chemotherapy and/or androgen receptor (AR)-targeting drugs (also called androgen-directed therapies, or AR-signaling inhibitors).

Over the last few years, doctors have been compressing this time frame, giving these AR-targeting drugs at the time that ADT is initiated – based on studies such as STAMPEDE, LATITUDE, suggesting that the cancer, which evolves and mutates as it spreads, is more vulnerable to treatment sooner rather than later.   Although these treatments can extend survival, they are not a cure.

What’s different about this new, full-on, kitchen-sink approach?  First, a high-intensity burst of hormonal suppression (ADT plus an androgen-directed drug, such as enzalutamide or abiraterone) is finite, given as neoadjuvant therapy for a few months before surgery and for up to a year afterward.  Then it’s over, and within a year, testosterone comes back.

Early results of exciting clinical trials, with more on the way, are highly encouraging.  One Phase II trial still in progress, led at UCSD by McKay in collaboration with Mary-Ellen Taplin, M.D., of the Dana-Farber Cancer Institute, grew out of a 2014 PCF Challenge Award study, led by Taplin.  The investigators tested two combinations of drugs given for six months before surgery:  abiraterone and prednisone plus leuprolide (Lupron), vs. abiraterone and prednisone, Lupron, and apalutamide.  After surgery, “men were randomized to continue therapy for one year, or simply to be monitored.”  The initial results of this trial were presented at the American Society of Clinical Oncology meeting in 2020.

“We showed that about one out of five men who received intensive hormonal therapy up front demonstrated very residual amounts of tumor, or no tumor at all, in their prostatectomy specimen” when the surgically-removed tumor was thoroughly examined by a pathologist under the microscope.   This “pathologic response,” seen in the surgically removed tissue, “hasn’t yet been proven in prostate cancer to be associated with long-term outcome,” notes McKay.  “But in several other tumor types – breast, bladder, rectal cancer, and others – evidence demonstrates that the pathologic response is associated with overall survival.”  In follow-up data from this and two other neoadjuvant studies, recently published in the Journal of Urology, McKay and colleagues showed that “of those patients who had no tumor or very little tumor left behind in their prostate, the rate of recurrence (the average follow-up time so far is 3.6 years)  was significantly lower.  In our cohort of 117 patients, only two patients who had a pathologic response and minimally residual disease had a recurrence, and no man died of prostate cancer.  Our hope is that we will develop data to prove that a pathologic response is associated with long-term outcomes in prostate cancer.”

In Some Responders at Prostatectomy, Cancer’s Already Dead!

Over time, prostate cancer acquires genomic alterations that help it to be more aggressive.  Each tiny mutation gives the cancer extra protection, maybe starting out with the genetic equivalent of a bullet-proof vest or stronger helmet, then becoming much more sophisticated – imagine a fighter jet deploying decoy flares or chaff as missile countermeasures.

Is it more vulnerable, and easier to kill, early on?  McKay and colleagues believe the answer is yes, and they’re testing this idea in several clinical trials.  One phase II study at UCSD still in progress, in collaboration with Taplin, involved 119 men with “unfavorable intermediate or high-risk disease.  “More than 90 percent of the patients had high-risk disease, and all of them, from the get-go, had very aggressive tumors,” says McKay.  “Over one-third of patients had Gleason 9 or 10 disease, and about 60 percent of patients had stage 3 cancer,” that had spread slightly beyond the prostate but with no evidence of distant metastases.  Men in the trial received either neoadjuvant abiraterone and prednisone plus leuprolide (Lupron), vs. abiraterone and prednisone, Lupron, and apalutamide.

One major reason why McKay and colleagues are testing this approach with surgery rather than radiation is to study the pathologic response: looking at how much residual tumor is present in the surgical specimen that has been removed after treatment.  Have they seen any changes?  Not in all men, but in about 20 percent, there’s a remarkable change:  “The primary tumor was dead and necrotic.”  The pathologists “looked at every little sliver of the prostate,” and found that these exceptional responders had either “less than 5 mm of tumor left behind, or no tumor left behind.”

Just think about that for a minute:  the surgeon removes the prostate, gives the tissue to the pathologist, who starts looking at it under the microscope and sees only corpses of cancer cells!

One patient who participated in this study is Pat Sheffler, who was diagnosed at age 53 with stage 3 prostate cancer and a PSA of 37.  He received abiraterone and prednisone, Lupron, and apalutamide for six months before prostatectomy, and started to see results right away.  In monthly blood tests before his surgery, his PSA levels dropped:  “34, 27, 21, 10, 4, 2, and 0.2.”  At surgery, he had “very minimal remaining tumor,” says McKay.  Then he underwent one more year of hormone therapy after surgery.  Two months after he stopped taking the trial medications, not only was his PSA undetectable, but his testosterone levels were coming back to normal.  “My hope for Pat is that he’s cured, that he can go on just being an amazing dad, husband, and advocate for prostate cancer awareness.”

In another phase II study led by Taplin, published in the Journal of Clinical Oncology, McKay and colleagues at UCSD, Dana-Farber, Beth Israel Deaconess Medical Center, Johns Hopkins, and the University of Washington reported a complete pathologic response (no remaining live cancer cells in the prostate) or minimal residual disease in 30 percent of patients treated with neoadjuvant enzalutamide, Lupron, abiraterone and prednisone before prostatectomy.

But what about the men who were not exceptional responders to big-gun hormone therapy?  The scientists have identified some key genetic changes in men who were non-responders, and they have some ideas about how to help these men, as well.

In several clinical trials, including this one, an intense blast of neoadjuvant androgen deprivation therapy (ADT) and androgen-directed treatment (drugs such as abiraterone and enzalutamide) has shown promising results in some men – but not all men.  Why is this?

“Very few of the men who responded had PTEN loss,” says McKay, “and ERG positivity was also associated with lack of response.”  But these men also seem to have something else that might render AR-blocking drugs unhelpful: lower AR expression, compared to other men.  Basically, if a tumor does not seem to have a lot of androgen receptor activity, then a medicine that targets these receptors won’t have much to work with.

Knowing this, McKay adds, could be an opportunity:  a springboard for additional or different therapy – perhaps neoadjuvant chemotherapy, for example.  Remember:  you’re still ahead of the game here.  You don’t have metastatic cancer, and many scientists believe that high-risk cancer, when it’s localized, is still vulnerable enough to be cured, if it’s hit hard with multiple weapons.

“This is an opportunity for us to develop and design a personalized treatment strategy for these men,” says McKay.  “It would be awesome if we could use somebody’s own genomics to help design the best treatment for him – similar to what’s being done in the breast cancer I-SPY trials, neoadjuvant studies with multiple treatment arms, some determined by biomarkers (specific genetic alterations that show up in a blood or tissue test).

Some men with high-risk prostate cancer might respond better to a PARP-inhibiting drug, such as olaparib and rucaparib.  This is the focus of another study that will be starting soon, McKay says.  “In men who have germline (inherited) alterations, such as a BRCA1 or BRCA2 mutation, we hypothesize that giving a PARP inhibitor in a neoadjvant setting before prostatectomy might significantly improve pathologic response.  We are finalizing the protocol for NEPTUNE, a biomarker-focused neoadjuvant trial testing PARP inhibitors in localized prostate cancer.”

“It is really exciting to be part of this paradigm shift,” says McKay.  “We have the opportunity to improve outcomes for men with high-risk localized disease, and we’re in the midst of trying to prove that through well-organized, thoughtful clinical trials.

“At the end of the day, the question is, how can we help our patients live longer and live better?  That’s really the big driver.  The good thing about localized disease is that we can try to cure more men of prostate cancer – not just extend life for metastatic disease, but can we develop a pathway so they don’t ever develop metastatic disease, and so they can be cured?  That’s what we’re aiming to do.”  And, bonus:  after the big blast of intense hormonal treatment, most men get their testosterone back.  “Most patients actually recovered their testosterone fully within the first year of discontinuation of treatment.”