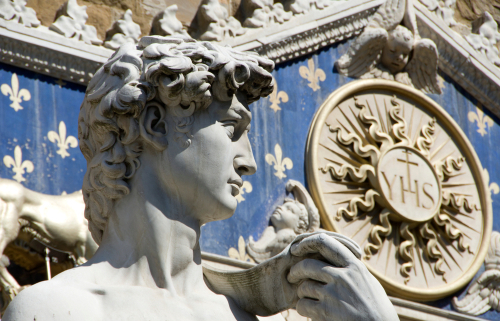 You’re minding your own business and happily living your life, as most of us are when there is a diagnosis of cancer.  What do you do now?

For Ric Siler, an actor and writer who was diagnosed with prostate cancer at age 64, the easy answer is that he went to Italy and wrote a one-act play that beautifully combines both of these life-changing journeys.  He has performed it in the New York area and a reading of it here.  His message is resiliency — a timely message for all of us, as I’m writing this during the global pandemic.

I was lucky enough to interview Ric for the Prostate Cancer Foundation’s website, pcf.org, and we have stayed in touch.  Ric did what many doctors believe is the most important thing you can do in a medical crisis:  he remained upbeat.  He practiced gratitude – for his wife and daughter, for a chance conversation that resulted in finding just the right surgeon, for the kindness and support of friends and the many medical professionals he would soon come to know, and especially for the beauty of nature and art, which he began noticing all the time.  He also kept his sense of humor.

Why does attitude matter?  Nobody understands the mind-body connection completely, but scientist Suzanne Conzen, M.D., has shown that stress involves the same pathways as cancer.  The stress hormone is cortisol, and just about every single cell in our bodies has a receptor for cortisol (this is called the glucocorticoid receptor, or GR).  There are many important implications to her work, but one of them is that decreasing stress lowers cortisol, and this can slow the growth of cancer.

Out of the blue:  When Ric’s prostate cancer was diagnosed, in June 2018, “I had no symptoms,” Ric says, “no idea that anything was wrong.  I had gone to my doctor for something completely unrelated, and he said, ‘We haven’t taken your blood for a while.  Maybe we should.’”  It turns out that in a year and a half, Ric’s PSA had doubled, from 4 to 8.

He went to a urologist near his home, in Rockland County, New York, and didn’t much care for him.  “He did nothing to instill confidence; I didn’t feel right about him.  There were four doctors at the practice, so I picked the one who was, available.  Funny how that works.”  The biopsy came back: cancer was present in all 12 tissue samples, and his Gleason score was initially thought to be 8; it later turned out to be 9.

Ric’s daughter, Laurette, suggested that he get a second opinion.  “I hadn’t even thought of that,” says Ric.  But he didn’t know what to do, or how to find a good urologist.  “The next morning, I was working out at the Y,” and without realizing it, he networked.  The PCF recommends both of these strategies.  It is very important to find a doctor in whose clinical abilities you feel confident.  And networking – to find the right doctor, or to talk to men who are or have been in your same boat – can make a huge difference in how you approach your cancer treatment and look forward to your life after cancer.

Ric talked to his friends, Peter and Steve.  Steve said he knew men who had survived prostate cancer, and offered to ask around for a good surgeon.  And “Peter said, ‘Talk to Jerry.’  Jerry is the founder and CEO of the company Peter and I work for, and is a prostate cancer survivor.”  Ric talked to Jerry that same day.  “I saw Jerry in his office with the door open.  I asked if he had a minute,” and explained the situation.  “It just came out in a flood.  I hadn’t planned to be emotional;” in fact, “a sort of stoic resolve is usually my default mode.”  But Jerry understood, and said had felt the same way with his own diagnosis of prostate cancer.  “He said, ‘When I heard the news, I thought my life was over.’  And then he said, ‘A year from now, we’ll be laughing about it.’  It was great to talk to someone who had been in my shoes and come out the other side.  He offered any help, any time I needed to talk, and said, ‘You’ll do the same for people someday.’  Yes, I will.”

The next day, Steve texted Ric with a referral from one of his buddies to urologist Ash Tewari, M.D., at Mount Sinai.  “Time for a second opinion!  I was reading Don Quixote at the time, and I saw this quote the same day, a Latin phrase that translates into, ‘After the darkness, I hope for light.’”

While he waited to see Tewari, Ric, who had started to keep a written record about his experience, made a note of how he was feeling:  “Keeping it as normal and real as possible.  Not dwelling on it.  Staying positive, or trying my best to.  I never completely lose sight of what’s happening, but I am not letting it get me down.”

The date for the operation was September 17.  “I asked about the hospital stay, and he said that he did three surgeries yesterday, and they were all going home today!”  Ric recalls.  He mentioned the big trip to Italy, scheduled for November, that he and his wife, Bette, had been planning for years.   Tewari said it should be fine, and it turned out to be a wonderful trip.

Ric’s play, “How Do You Say Prostate in Italian?” covers what happened next in some detail:  the MRI, which had radio music piped in, including ad for Dunkin’ Donuts in between soothing classical music pieces; the hospital, where he was delighted to have a private room (“It could spoil a guy!”); walking the hospital floors after surgery, with his catheter, “pee bag,” and abdominal drain; important milestones, from passing gas after surgery to getting the catheter removed, to buying pads, getting biofeedback and learning to do Kegel exercises while he dealt with temporary urinary incontinence.  And it’s funny!  And enthusiastic, and full of gratitude.

Not so fast:  Ric’s PSA started to go up again after his surgery.  “I had thought I was out of the woods… not so fast, Kimosabe!  I had thought the PSA being elevated post-surgery meant that maybe there is cancer… nope.  It means yep, there’s cancer, and we have to deal with it.’”

Christmas of 2018 was a time for reflection.  Ric made a note:  “I’ve lived my life mostly feeling kind of indestructible, so it’s sobering to feel, well, destructible.  One thing that I know for sure as I sit here quietly with the dog and a beautiful tree with presents arrayed around it, under it and on it, and my wife and daughter sleeping peacefully upstairs, is that I want to be here next year to do it again, and the next and the next… and I’ll do whatever it takes to make that happen.”

Under the care of medical oncologist William Oh, M.D., and with the goal of “total eradication of the cancer,” Ric had a short course of hormonal therapy and eight weeks of external-beam radiation therapy, which had its own challenges.  When the eight weeks ended, Ric was surprised to find he had mixed feelings.  He wrote: “While the treatments have been happening, there has been a sense of rock-solid purpose.  We’re working together to eradicate this cancer.  I do my part by coming in with a full bladder, no gas and on time, and I get really good at it.  Now that it’s over, we have to wait six weeks – only then will we know for sure.  It’s all about PSA levels at this point.”  Laurette surprised him on his last day of treatment by showing up to ring the official bell – a rite of passage at many radiation therapy centers to say, “I made it through!”

Ric is cancer-free now, and getting on with the rest of his life.  “I was so fortunate,” he says.  “If I hadn’t mentioned my cancer to these guys at the Y, I wouldn’t have met Dr. Tewari,” and through Tewari, Dr. Oh.  “Everything fell together beautifully for me.  If I hadn’t gotten that blood test done, I’d be sitting here a year and a half later none the wiser, and the cancer would have continued to grow.

“The whole point of my play, aside from the personal reflections on living to see the art in Italy, and what it meant to me, and being here after this brush with cancer, is that early detection is really important.  You’ve got to get checkups regularly, and if something’s not right, you have to take the steps to see what’s wrong, go to the best people you can.  I wasn’t really going into this with any great message; I didn’t know what would come out of it or what the next step would be.  It is a cautionary tale for doing what you need to do, as soon as you can.  Silence is not golden when it comes to the prostate.”

Ric has not been silent; one man he spoke to about his experience said, ‘Wow, my wife wanted me to make an appointment with the doctor.  I didn’t go.  I’m going to do it right now.”  He hopes such encounters will be like “ripples in the pool,” men helping each other to be healthy.  When Jerry first told him that one day, he would laugh about his experiences, Ric didn’t believe him.  “I hoped he was right – and he is!  But it’s been quite a ride.”

Recently, Ric did a reading of his play in New York.  Afterward, a woman came up to him; her husband is a prostate cancer survivor.  “She took me aside and said, ‘This is very important, because men don’t talk about this stuff except in whispers.’”