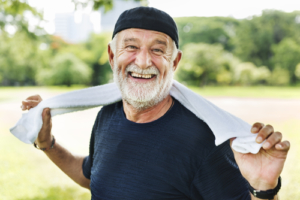 I’m in my seventies.  My doctor said I don’t need any more PSA tests because I’m too old to worry about it.  Is that right?

It depends on you and your PSA history.  There are some troubling statistics, which I will get to in a minute.  But first the good news:  If you are in your 70s, and your PSA is very low (how low? see below) and has been for years, you are probably unlikely to develop lethal prostate cancer.  H. Ballentine Carter, M.D., the Johns Hopkins urologist who dedicated his career to studying PSA and who came up with the concept of PSA velocity, asked this question using data from the Baltimore Longitudinal Study of Aging (BLSA):

Is your PSA track record good?  Basically, Carter looked at decades of blood samples from the same group of men, and saw which men developed prostate cancer, low-risk and high-risk, who died of prostate cancer, and who never developed it at all.  He also had been studying medical literature on other types of cancer.  In a recent interview for Discovery, the magazine for the Brady Urological Institute at Johns Hopkins, he told me:  “It just dawned on me, mainly from cervical cancer screening literature:  What if very young men have PSA levels that are extremely low, and have cumulative numbers of negative tests.  Would that suggest later in life that they are very low-risk?  As it turns out, if you’re in your 50s or early 60s and you have very low PSA, it’s unlikely that you’re going to be diagnosed with prostate cancer later in life.”  (Note: He’s NOT saying, “Stop getting screened in your 50s or early 60s!”) “Is there an age and a PSA level where you could tell an older man, ‘Congratulations, you made it, you don’t ever need to have a PSA test again?”  Sure enough, you reach an age around 75, and your PSA is less than 3, it is extremely unlikely that you will be diagnosed with lethal prostate cancer.”

In our book, we say:  “If your PSA track record is good, you can probably retire earlier from PSA screening.”  So what does this mean?  Carter showed that if PSA testing were discontinued at age 65 in men who had PSA levels below 0.5 to 1.0 ng/ml, it would be unlikely that prostate cancer would be missed later in life.  In another study, Carter and colleagues found that it is safe to discontinue PSA testing for 75- to 80-year-old men with PSA levels lower than 3; none of the men in that study later died from prostate cancer.  However, the 75- to 80-year-old men who had PSA levels greater than 3 remained at risk of developing life-threatening disease.

Now, here’s the troubling point, which we discuss in our book:  Population studies have shown that men diagnosed at age 75 or older account for 48 percent of metastatic cancers and 53 percent of prostate cancer deaths, despite representing only 26 percent of the overall population.

How can this be? Another Johns Hopkins study, led by my co-author, urologist Patrick Walsh, M.D., and radiation oncologist Phuoc Tran, M.D., may shed some light here.  The Hopkins scientists studied 274 men over age 75 who underwent radiation therapy for prostate cancer. “We found that men who underwent PSA testing (as in, men who got regular screening for prostate cancer) were significantly less likely to be diagnosed with high-risk prostate cancer, and that men with either no PSA testing or incomplete testing (either a change in PSA was not followed up, or a biopsy was not performed when it was indicated); had more than a three-fold higher risk of having high-risk disease at diagnosis, when adjusted for other clinical risk factors,” says Tran.  They also found that “many of these men (who had not been screened, or who had gotten incomplete screening) who had a low PSA were found to have cancers that could be felt on a rectal exam” — indicating, Walsh says, that “older men need both a PSA and a digital rectal examination.”  Although this was a small study and more research is needed, “we believe that PSA screening should be considered in very healthy older men.”

So:  Are you otherwise very healthy, and could expect to live a good, long life? It’s probably a good idea to keep getting checked for prostate cancer.

What’s the difference in the men who had been getting regular screening?  Their cancer was most likely caught much sooner after their PSA started to go up.

Screening saves lives.  Here’s an example from another specialty:  My husband, Mark, is a gastroenterologist, and he knows, when he does a routine colonoscopy on someone – let’s say a 65-year-old man – who got a screening colonoscopy at age 50 (or 40 or younger, if that person is high-risk), and who had a follow-up colonoscopy when recommended, that he is much less likely to find bad cancer in that guy.  But say a man of that same age comes in for the first time to get a colonoscopy, maybe because of some blood in the stool.  Say that guy’s mother had colon cancer.  That man should have gotten checked out for the first time 25 years ago.  I’m not sure what his record is, but over the years, Mark has had to remove an awful lot of polyps – once, I remember, it was 40! – from people who didn’t get screened when they could have.  Worse, he has found cancer that has gone through the wall of the colon, cancer that needs surgery to remove part of the intestine, cancer that needs chemo, cancer that very likely would never have had the chance to develop if caught early.

Don’t be that guy.  Please.

PSA Velocity:  It’s Not the Number, but What It Does!