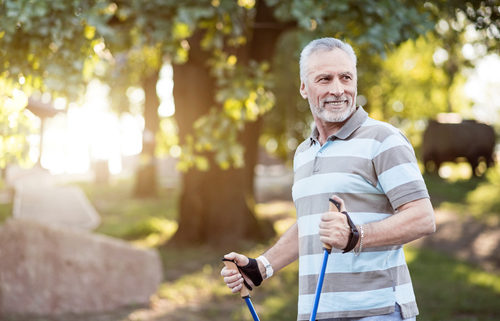 Hey, guys: If you think exercise is just about pumping iron and getting big traps, six-pack abs and “gun show” biceps, your prostate would like to disagree.

To your prostate, how ripped or shredded you are is not nearly as important as your cardiovascular health.

Now, you may be wondering, why should the prostate even care about cardiovascular exercise? Here’s a very good reason: exercise can lower your risk of getting lethal prostate cancer, or of having cancer come back if it’s already been treated.

Epidemiologist June M. Chan, Sc.D., an expert on lifestyle and cancer, heads a research program at the University of California San Francisco that seeks fixable risk factors for prostate cancer progression – things in your lifestyle that you can change to lower your odds of dying of prostate cancer. I recently interviewed her for the Prostate Cancer Foundation’s website.

In previous work, Chan and colleagues were the first to show that vigorous exercise (such as jogging or bicycling) after diagnosis was associated with a reduced risk of prostate cancer death in men with localized disease. “We observed that three or more hours a week of vigorous activity, as opposed to less than one hour a week, was associated with an approximately 60 percent reduction in the risk of dying of prostate cancer.” Chan and colleagues observed similar results among 1,455 men in the Cancer of the Prostate Strategic Urologic Research Endeavor (CaPSURE). These findings suggest that “engaging in relatively vigorous physical activity and/or having higher cardiorespiratory fitness may protect against prostate cancer progression.”

Now, exactly why is this? That’s what Chan and colleagues are hoping to figure out. “We have a number of studies here at UCSF examining lifestyle and prostate cancer,” she says. “One trial is for men on Active Surveillance, and our main goal is to look at changes in prostate tissue.” Investigators are comparing prostate biopsy samples taken at diagnosis and again after a 16-week period in which men are randomly assigned either to continue their usual activities or to take part in a personalized exercise program that is designed to increase their cardiopulmonary fitness. The researchers also are measuring chemical processes involving circulation and metabolism, looking for specific differences in the two groups.

In this study, Chan is not as interested in studying the men who are already exercising a lot. “We anticipated that the biggest benefits would be observed in individuals who are relatively sedentary and who adopt moderate exercise. If men are already highly fit, they’re probably already exercising several hours a week, and we thought it would be harder to ask them to do more or spend more time, so that we could observe a relative change in fitness,” she says. “Our main goal is to increase the fitness levels gradually through a walking program in men who are at low to intermediate levels of fitness at the beginning of the study.”

The idea here is that even moderate exercise can help lower the risk of lethal prostate cancer. We’re talking about the kind of exercise that almost everyone can do. It is “purposely scaled to be relative to someone’s baseline fitness, and we are choosing men who are low- to moderate-fit,” Chan notes. Men in this study start out just by walking, and then walking faster, and then escalating – literally – to walking uphill.

The men aren’t going flat-out, like someone in a high-intensity workout. They’re just doing a little more than they could, and after they get used to that, they do a little bit more – slowly building up their fitness.

Chan speculates that the tissue samples in the exercise group will show changes in indicators of angiogenesis (cancer’s ability to build a scaffolding of blood vessels and other infrastructure so it can grow and move beyond the prostate); in inflammatory processes; in insulin and insulin-like growth factor signaling; in androgen receptor signaling pathways; and in oxidative stress mechanisms. “Biochemically, exercise could help deter metastasis of the tumor by changing the environment for the cancer” – in effect, spraying fire retardant on the tumor. Not necessarily extinguishing the flame altogether, but making it burn slower, and helping the body set up fire breaks to keep the cancer confined to its current location.

“Prostate cancer may be the most common cancer where exercise, used like a drug, can confer an increase in survival,” says medical oncologist Jonathan Simons, M.D., CEO of the Prostate Cancer Foundation. “There is no form of treatment that has this effect, and certainly not one as beneficial to the entire body as exercise.”

It may be, Simons adds, that what exercise does – just as it improves blood flow in the arteries – is give cancer a better blood supply that keeps it happy where it is, “so the tumor has no motivation to leave.” So basically, exercise makes cancer feel like it’s at a nice hotel, with free cable TV, continental breakfast, and a pool. It’s content to stay there indefinitely, ordering room service. “When tumors are stressed” – when they’re in a bad neighborhood, in effect – “they have genes that are programmed to help them survive by getting them to crawl away to someplace that better serves their needs.”

One of those genes, Simons found in research at Johns Hopkins, not only pipes in more blood to supply the tumor; it gets rid of waste products – the cancer cells’ sewage, in effect. “When tumors try to turn on blood vessel growth to get more nutrients, they also build their own plumbing for both intake and waste disposal. Angiogenesis is not just about getting oxygen and food – glucose and protein – to the cancer. It’s getting rid of byproducts, too. That kicks off a genetic program so the cancers can relocate” – start to spread.

But giving the cancer a better blood flow might subvert the cancer’s need to boost its own blood supply. It just may be that exercise makes cancer, rather than head for the door, sit back in the recliner and reach for the remote. A contrary notion, isn’t it – that in order to turn your prostate cancer into a couch potato, your best chance is not to be one yourself?

This doesn’t mean, of course, that men who exercise are immune to prostate cancer. “There are very fit athletes who have had forms of prostate cancer that are so aggressive, so genetically mutated, that have proved fatal,” notes Simons. However, those men are at one end of the spectrum of prostate cancer. There are many thousands of men at the other end or in the middle, for whom exercise may make a real difference. “What if you have a Gleason 8 cancer, you had surgery, your PSA was undetectable, and now it’s starting to creep up. And what if you could exercise and delay its colonizing in your bones by eight or nine years, because you so shifted the chemistry in your body that the cancer cells just sat there? That’s a very abstract concept, one that’s still not widely appreciated. But if we could get even three times as many men right now exercising, we could change the overall survival of the disease.” And if scientists like Chan can figure out precisely why this is happening, it may lead to development of new treatments that could make exercise even more effective in deterring the return or spread of prostate cancer.

Is it ever too late to start to exercise? No!

In other trials, including one funded by Movember, Chan and colleagues from around the globe are studying the benefit of aerobic exercise and also strength training in men with castrate-resistant prostate cancer, to see if these interventions can help men at a later stage of cancer live longer. “There are data in men with advanced disease also suggesting that exercise may impart not only quality of life but also clinical benefits” she says.

BMI calculators are available on the internet, but briefly, if you are at a healthy weight, your BMI is between 19 and 24.9 kg/m2.  In the Physicians’ Health Study, having a BMI of 30 kg/ m2 or greater “was associated with a nearly twofold increased risk of prostate cancer death,” notes Chan. Further, “a meta-analysis of six studies in prostate cancer patients reported that a 5 kg/m2 increase in BMI raised the risk of dying of prostate cancer by 20 percent, and of biochemical recurrence (having the PSA start to rise again after treatment) by 21 percent.”

More of this story and much more about prostate cancer are on the Prostate Cancer Foundation’s website, pcf.org. The stories I’ve written are under the categories, “Understanding Prostate Cancer,” and “For Patients.” The PCF is funding the research that is going to cure this disease, and they have a new movement called MANy Versus Cancer that aims to crowd-fund the cure, and also empower men to find out their risks and determine the best treatment. As Patrick Walsh and I have said for years in our books, Knowledge is power: Saving your life may start with you going to the doctor, and knowing the right questions to ask. I hope all men will put prostate cancer on their radar. Get a baseline PSA blood test in your early 40s, and if you are of African descent, or if cancer and/or prostate cancer runs in your family, you need to be screened for the disease. Many doctors don’t do this, so it’s up to you to ask for it.

What is Prostatitis, Anyway?