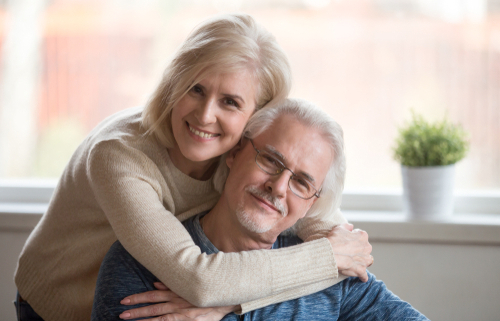 When it comes to disrupting your life, prostate cancer cuts quite the swath.   We don’t know exactly how big this trail of disruption is.  We don’t know how bad it is, either.

Let’s start with the numbers.  In the U.S. alone, there are more than 3 million men out there who are prostate cancer survivors.  Although we can speculate, we don’t know exactly what these guys are going through; everybody’s experience is different.  It doesn’t help, either, that many men are reluctant to discuss the side effects of treatment.

But these men are just the tip of the iceberg.  An estimated 73 percent of men aged 65 to 80 are married or have partners, says New York University urologist Stacy Loeb, M.D.  “It’s safe to say that if there are more than 3 million prostate cancer survivors and approximately three-fourths of them are partnered, that’s a lot of people who are being affected by this disease.”

And hardly anybody knows what these wives and partners are experiencing; in part, because hardly anybody has asked them.  Loeb and colleagues are hoping to shine some light on these other survivors.  Loeb was first author of a study recently published in the Journal of Sexual Medicine, called, “A Call to Arms: Increasing our Understanding of the Impact of Prostate Cancer on the Sexual Health of Partners.”  I recently interviewed her for the Prostate Cancer Foundation’s website.

Loeb and colleagues found that sexual disruption for these couples often starts with biopsy!  “One of the potential effects of sampling the prostate with needles is blood in the semen, which can be off-putting to both patients and their partners.  It usually doesn’t last more than a few weeks, and it’s not medically dangerous. “However, seeing blood can certainly be disruptive of the sexual encounter – so even from the process of diagnosing prostate cancer, there can be an impact on sexual health for the couple.  There is controversy over whether biopsies – or repeated biopsies – are associated with erectile dysfunction (ED).”  Some evidence suggests that undergoing multiple biopsies can cause scar tissue to develop in the nerves responsible for erection, but the medical literature is “a bit conflicting, Loeb says.  It’s also difficult to study, because many men getting multiple prostate biopsies are also getting older, and have other health conditions that can affect sexual health.

And that’s just diagnosis of prostate cancer.  “All forms of prostate cancer treatment can have a potential impact on sexual health,” says Loeb.   For example:  “With surgery, the greatest insult to the body is at the beginning, and then function can gradually recover over time.  With radiation, ED can take several years to develop.”  But what about the men – and there are thousands each year – whose cancer requires more than one form of treatment?

“Surveys from both the U.S. and the UK show that many men who undergo various forms of prostate cancer treatment have sexual complaints,” says Loeb.  “However, many of them are not getting any treatment for their ED or other issues.  This really has a huge impact for the partner.  ED is one of many possible sexual consequences.  Penile curvature (Peyronie’s disease) is another.  There’s the potential for penile shortening (note: use of a vacuum erection device to stretch the penis can help prevent this) and there are issues with libido.” Men who have had prostatectomy may also struggle with urinary incontinence, and some may experience sexual incontinence (leaking urine during sex).  “There are changes in orgasm after prostate cancer treatment, as well,” Loeb adds.

Men who undergo short- or long-term androgen deprivation therapy (ADT) experience a loss of libido and complications including gynecomastia (breast swelling; this can be treated with radiation).  Does this affect their partners?  Of course!  But by how much, nobody knows.  The doctor visits are typically “focused on the patient,” says Loeb.  “There’s a significant unmet need for greater support for partners.”

Many prostate cancer treatment centers offer their patients help with penile rehabilitation for recovery of sexual function.  “In some practices, there is a different urologist, nurse practitioner, or physician assistant who manages sexual health issues than the urologist who did the surgery, whose main expertise is in cancer control.”  The good news is that sexual medicine subspecialists can provide a lot of help.  The not-so-good news is that many men don’t take advantage of what these experts can offer.  There’s still a lot of stigma.  In the study, Loeb and colleagues found that a significant number of patients were not seeking help with sexual recovery.  Shame or unwillingness to discuss sexual issues may account for some of the reluctance; another barrier may be financial.  “Some of the treatments are very expensive.”  For example, erection-assisting drugs can be expensive, and many insurance plans don’t offer reimbursement for a VED (although the Veterans Administration does cover VEDs).

The other not-so-good news is that “there’s a lot of work to be done with the partners, defining their experience and the unmet needs that they have, and finding ways to provide additional support to them.”

In one way, these survivorship issues are a good sign – they’re happening because more men with localized disease are being cured of prostate cancer, and more men with cancer that has escaped the prostate are living for many years, says Loeb.  “But what comes with that is having a large pool of survivors who are living for years with the impact of the disease.  This impact does not only affect the patients, but also the people around them.”  In the study, some of the partners described “problems with relationship dynamics,” arguments or the opposite: isolation.  “They feel they can’t discuss it with their partner.”  Some describe making changes, like using a certain type of condom to deal with sexual incontinence.  “In some cases, there’s a real feeling of grief; people feel cut off from their partner, and they can’t discuss some of the sexual issues easily. There really is a great need for more research in this area, and help for the partners of prostate cancer patients.” Many of the partners, by the way, may be having sexual health issues of their own, including going through menopause.

So:  Men, be kind to your partners.  They’ve been through a lot with you.  Even though it’s not in their bodies, it’s their cancer, too.

All of this said, I just want to add a personal note:  As the wife of a prostate cancer survivor, I‘m just so happy, and so very grateful, that the cancer is gone!  This doesn’t mean the recovery hasn’t been a drag; it has.  But that weight of fear that felt so crippling, for me at least, was much worse.

OMG!  My Treatment is Delayed!