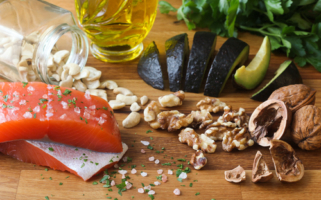 Part One:  Live Your Best Life!

What can you do to live your best life?  You might say, quite reasonably, that your best life does not include prostate cancer.  True.  But no matter where you are in your journey – prevention, treatment, recovery, or survivorship – what can you do to maximize the good, to help your physical and mental wellbeing?  There’s actually quite a lot!

For example: Exercise not only helps you lose weight; it helps fight depression, and it even can help slow down prostate cancer!  And eating the right diet – as opposed to eating a lot of junk and chemicals – can boost your spirits, your energy level, and just generally make you feel better.  Even better:  it can help lower inflammation and insulin, and this can help your body fight prostate cancer, and can help prevent diabetes, cardiovascular disease, and other chronic illnesses.

There is growing evidence that the lifestyle choices that help prevent or fight other diseases – like, eating low sugar for diabetes, or exercising for your heart – can also help prevent or slow down prostate cancer.

Right off the bat, both of these experts note that studying food is hard, and the answer to staying healthier is not one single thing.  There is no dietary magic bullet, and if you see one advertised and choose to take it, do so with a huge proverbial grain of salt!  In many studies over the years, scientists have tried to isolate specific foods to see if they promote or prevent cancer – but they did it by asking people to recall what they ate over certain periods of time.  And most people don’t have ideal memories:  “Yes, I ate that fairly regularly.  No, I didn’t eat this – wait, maybe I did.”  See the difficulty?

Okay, so what if people keep a food journal?  That’s more helpful, although these kinds of studies, done right, take many years.  Even then, if you isolate certain foods that seem promising, you still don’t know exactly what’s happening!  Let’s say you are studying what people eat and you notice a trend in those who didn’t get cancer:  they eat apples (hypothetically).  What kind of apples?  Is it all apples, or just Granny Smiths?  Were they all grown in the same type of soil?  Were they cooked, or eaten raw?  Peeled or not?  Organic or not?  How many did people eat a day?

But wait!  Did these people even have an actual benefit from eating the apple – say, one they brought to work from home – or did they benefit from not eating a bag of cheese puffs or Twinkies from the vending machine instead?

And wait some more!  Do the people who benefited have genetic or molecular differences that make them more likely to be helped by apples?  Or… are people who eat apples also more likely to exercise and take better care of their health in general – so maybe it’s not even the apples but their whole lifestyle that made the difference, and we’re back to the drawing board!

This is why science around nutrition takes time.  Remember back in 2010 when coffee was bad?  And now, here we are in 2020 and coffee is good?  This stuff evolves.  The good news is, we’ve learned a lot.

Scientists don’t have a Paint-by-Number approach to food science, with every single food accounted for.  But they are able to paint with broad, but definitive, strokes.

In our interviews, June Chan and Lorelei Mucci both cited work led by Harvard scientists Fred Tabung, Ph.D., M.S.P.H., and Edward Giovannucci, M.D., Sc.D., that look at the relationship between diet and inflammation.  In one, the scientists tracked inflammatory markers in the blood and whether inflammation was raised or lowered by what people ate, based on data from thousands of participants in the Nurses’ Health Study and the Health Professionals Follow-Up Study.  The key for us is the foods they found that reduce inflammation:  dark yellow vegetables (carrots, winter squash, sweet potatoes, etc.); leafy green vegetables (like spinach, broccoli, kale, etc.), coffee, and wine.  Beer (one bottle, glass, or can) was in this category, too.  So was tea, but its effect was not very strong.

But if you love canned tuna, and if you love a baked potato or corn on the cob, don’t freak out:  remember, broad strokes!  The key seems to be to make sure you do eat the anti-inflammatory foods.  For example, the anti-inflammatory effects of leafy green vegetables, dark yellow vegetables, wine and coffee are more powerful than the very mild, pro-inflammatory effect of “other fish” or “other vegetables.”  If you feel that you just can’t give up meat entirely, that’s okay – just aim for smaller portions of meat, surrounded by anti-inflammatory vegetables.  Example:  instead of regular fries, try sweet potato fries.  They’re really good, and they fight inflammation!  You can have your burger, but still help counteract inflammation:  it’s a win-win!

So:  what about foods that are bad for diabetes and insulin resistance?  Tabung and Giovannucci led another study, also using data from the thousands of participants in the Nurses’ Health Study and Health Professionals Follow-Up Study, to assess the “insulinemic potential” of diet and lifestyle – basically, how foods and exercise affect blood sugar and insulin resistance, as measured by certain biomarkers in the blood.  Foods that did not raise blood sugar or insulin resistance included wine, coffee, whole fruit, high-fat dairy (whole milk, sour cream, a half-cup of ice cream, a slice of cheese, etc.), nuts, and leafy green vegetables.  Physical activity was also good for lowering insulin resistance and blood sugar.

What do the experts make of this?  Benjamin Fu, a postdoctoral fellow in Lorelei Mucci’s lab at Harvard has been looking at these two different dietary patterns: “a diet associated with hyperinsulinemia, and a hyper-inflammation diet.”  The two diets have some overlaps, but are not identical.  Neither is good for men worried about prostate cancer, Mucci says, “particularly the hyper-insulinemia (blood sugar-raising) diet, which is associated with a 60-percent risk of more advanced or fatal prostate cancers.”  Let’s just let that sink in for a second:  if you eat a lot of carbs and sugar and you get prostate cancer, you’re more likely to have a serious form that could kill you.  Okay, let’s go on:

Mucci continues:  “The hyper-inflammatory diet also is associated with an increased risk of prostate cancer,” particularly in men who develop cancer at a younger age, in their forties and fifties.  “It may be that earlier-onset cancers are more susceptible to the effect of diet and lifestyle.”

What does heart health have to do with it?  A lot, for many reasons.  It turns out, says Mucci, that “cardiovascular disease and other chronic diseases are the major cause of death in many men who have prostate cancer.  If you look at men with localized prostate cancer and survival outcomes over 10 years, three-fourths of the deaths in those men will be due either to cardiovascular disease or another chronic disease.  Only one-fourth of the mortality is due to prostate cancer.”  Now, you may be thinking, we all have to die of something, right?  This is true, but “these men are dying sooner than they should, and eating a plant-based diet rich in cruciferous vegetables will help lower that risk of cardiovascular disease.”

Which brings us to the Mediterranean Diet:  Not only do people in Mediterranean countries, as compared to Americans, eat more vegetables and fruits, fewer fatty foods, less processed junk, and less red meat – “which increases insulin resistance, increases inflammation, raises cardiovascular risk and also is part of a dietary pattern that may increase obesity, as well,” as Mucci notes.  You know what else they eat a lot of?  Olive oil.  Greater than 30 ml a day, which is a little over two tablespoons.  “There’s really good evidence that extra virgin olive oil (EVOO), either on its own or as part of the Mediterranean diet, substantially lowers the risk of cardiovascular disease and lowers the risk of overall mortality.  The evidence specifically for men with prostate cancer is much more limited, but given the strong benefits for overall death and cardiovascular death in particular, not only using EVOO, but using it to replace butter or margarine, is something that is worth doing.”

Coming up:  Part 2:  What’s Good for the Prostate is Good for All of You!

More Fuel for the 2020 Dumpster Fire: The Fallout of Not Screening for Prostate...