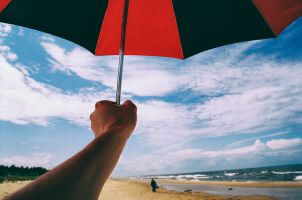 In 2002, when I ghostwrote the first edition of The Paleo Diet for Loren Cordain, I thought we were writing sacrilege when he said people need sunlight.  That’s because our view of what’s normal and natural has gotten skewed.  “Oh, no!” I thought.  “Must have sunscreen.  Sunscreen good, sun bad!”  Just a few steps away from Frankenstein being terrified of fire.

“The experience of our hunter-gatherer ancestors proves helpful,” Cordain wrote.  “Many studies have shown that people with high lifetime sunlight exposure, similar to that of hunter-gatherers, have lower rates of melanoma than those with low sunlight exposure.  Also, indoor workers have a greater risk of melanoma than outdoor workers.  Even more puzzling, melanomas often arise in body areas that are infrequently or intermittently exposed to sun.”  Many scientists believe that severe sunburn during childhood — like that time where you went to the beach and came home red as a lobster, and maybe your mom (as mine did) treated it with baking soda and/or aloe, apple cider vinegar, or other home remedies — or intense burns in areas that usually don’t see the sun are bigger risk factors for the development of melanoma.

“When your exposure to sunlight is gradual, moderate and continuous,” Cordain explained, your body responds “in a manner guided by evolutionary wisdom.”  Your skin begins to get tan, because your body is ramping up its production of melanin.  The darkened skin helps protect you from the sunlight’s most damaging ultraviolet rays.  Also important: Vitamin D levels in the blood start to increase, too, as the UV light hits the skin and your body starts to convert cholesterol into Vitamin D.

Vitamin D is a really good thing.  It’s actually a hormone, which is mostly formed in the skin.  As an aside, jumping to other books I’ve co-written: In Dr. Patrick Walsh’s Guide to Preventing Prostate Cancer, Walsh, the noted Johns Hopkins urologist, points out that “over the last 25 years, the death rates from prostate cancer in America have been the highest in the regions of the country that get the least sunshine” (north of 40 degrees latitude).  However, Walsh cautions, taking too much Vitamin D is not a great approach, either.  If you’re going to take a Vitamin D supplement, he advises not taking more than 4000 IU per day.

Cordain cited evidence from population studies confirming that people with the greatest lifetime sun exposures have the lowest rates of prostate, breast, and colon cancers.  But most important to Cordain, from years of study of our Stone Age ancestors, is this: “Exposure to sunlight is natural for humans.  It is part of our evolutionary heritage.  Without sunlight, it is virtually impossible to achieve an adequate intake of vitamin D from the natural foods that were available to our hunter-gatherer ancestors.  Our food supply has been a significant source of vitamin D for a very short time — less than a century, when dairy producers began adding it to the milk and later, to margarine.  Sunlight exposure is healthy as long as it occurs in a slow, gradual, and limited dose over the course of a lifetime.”