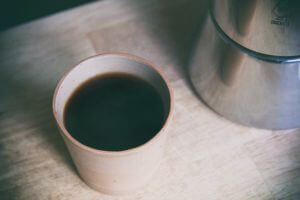 Imagine:  John Wayne in True Grit, charging bad guys on horseback, with the reins in his teeth, a Colt revolver in one hand and a Winchester rifle in the other, and suddenly, he veers off and heads for the woods.   He’s acutely regretting that cup of coffee he had back at the campfire.

Well, that didn’t happen, because he’s John Wayne.  But it certainly might happen to us lesser mortals.  In fact, this laxative effect is a known consequence — or, hey! It’s a benefit, depending on how you look at it – of drinking coffee.  The effect can happen in as little as four minutes, according to an English study published in the journal, Gut.

Why does coffee make some people need to poop?  Several reasons.  It’s not the caffeine (decaf can produce the same effect), and it’s not the heat of the beverage; the English scientists tested drinking hot water in the same group of study participants, and nothing happened.  Out of 14 people studied (12 men, two women), eight of those who drank black, unsweetened coffee needed to move their bowels.  The coffee sped up the gut’s motility – movement of food through the digestive tract, using a series of muscle contractions called peristalsis – in the eight responders, but not in the others.  “The increase in rectosigmoid motility induced by coffee lasted at least 30 minutes,” the scientists reported.  “These results suggest that drinking coffee can stimulate a motor response of the distal colon in some normal people.”

The fact that this happened so darned fast, the researchers speculated, doesn’t mean that coffee actually rockets through the system.  Instead, “we suspect that coffee may induce a ‘gastrocolonic response’ by acting on epithelial receptors in the stomach or small bowel.”  This might be activated by nerves or hormones in the GI tract; also, they added, “coffee has been shown to promote release of gastrin, which can increase colonic … motor activity.”  So for some people, coffee shifts the gut into temporary fast-forward mode.

Why Does Coffee Make You Poop?Coffee is a great way to wake you up, and it’s also a great way to keep you regular. What’s so special about coffee that it makes you poop?—–For a collection of all our videos, check out TestTube Video!

What else does it do?  I am fortunate to be married to an excellent gastroenterologist, Mark Worthington, M.D., formerly on the medical faculty at the University of Virginia and Johns Hopkins and now in private practice in Arizona.  “Basically, coffee causes a net secretion of fluid into the small intestine,” he says.  “For most people, the colon takes up the slack – it sucks up the extra water – but it gets activated in the process.  For some people, coffee actually leads to diarrhea because the colon can’t handle it all.”  People who particularly have trouble with coffee, he adds, are those with colitis (inflammation of the colon).  Also: “coffee sweeteners, such as Stevia, can cause diarrhea in some people.”  If you add a lot of dairy to your coffee, and dairy products are difficult for you, this might make coffee a bit of a digestive challenge, as well.

Is that it?  Well, no, there’s the acid.  Coffee is loaded with a phenol called “chlorogenic acid,” and – again, not in everyone – for those of us who lack cast-iron stomachs and are already prone to acid reflux, or for people who drink coffee on an empty stomach, the acid can irritate the stomach lining.  This is called gastritis, and it can result in heartburn, hiccups, pain in the belly, nausea, and can even make you throw up if you don’t get some food in there to help combat the acid.  Caffeine itself – let’s face it, the major reason we drink coffee – also can cause the stomach to pump out more acid.

Note:  Don’t think I’m anti-coffee.  I’m not at all.  Coffee also does a lot of good things, including help lower your risk for Alzheimer’s disease, which I will talk about in some future post.  This is not that post.

Good news for your tummy:  If coffee starts your day off with an upset stomach or gives you the rumblies, don’t despair:  You are not alone.  In fact, there are so many people with this problem that gut-friendly coffees – with more available all the time – have been developed just for you.

Which is good news.  However, if you’re one of those susceptible to coffee’s Number Two side effect – no matter how gentle or organic or gourmet your coffee may be — you’ll still probably have to poop after you drink it.

Prostate Cancer Screening and You