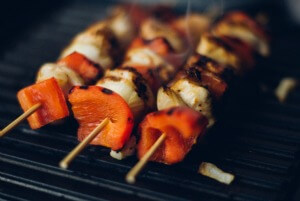 Good news for people who love barbecue, hot dogs, burgers, and steak cooked on the grill: It pays to eat your veggies.

The key to this story is something called “PhIP.” A few years ago, noted Johns Hopkins scientist Bill Nelson, M.D., Ph.D., director of the Sidney Kimmel
Comprehensive Cancer Center, began investigating its role in cancer. PhIP is a funny little word. (Pronounced “fipp,” it’s a short name for a long chemical
compound.) It sounds so harmless: “Hey, let’s get PhIP and go over to the club for some tennis,” or “I don’t give a PhIP what you do,” or “Let’s do some
PhIP shots!” But it’s not.

PhIP is found in meats cooked at high temperatures. It is a “pro-carcinogen,” a chemical that turns into something that can attack and mutate DNA, and is
known to cause prostate, breast, and colorectal cancer in rats. Unfortunately, we create carcinogens, or cancer-causing agents, with every steak we grill
or piece of chicken we fry, and PhIP is one of them. In 2007, Nelson and pathologist Angelo De Marzo, M.D., Ph.D., reported in Cancer Research
that when rats are exposed to PhIP, DNA mutations occur in the prostate. Since then, they have learned much more about this little sucker’s role as a
dietary contributor to cancer. I recently wrote about Nelson’s work for Discovery, the research magazine for the Brady Urological Institute at Johns
Hopkins.

The scientists have discovered that veggies help counteract the effects of PhIP. “When we fed rats tomato and broccoli along
with PhIP, the animals lived longer and showed reduced incidence and severity of prostate neoplasms (new, abnormal cell growth; particularly of PIN,
prostatic intraepithelial neoplasia – funny-looking cells that are linked to prostate cancer), intestinal cancers and skin cancers as compared to rats fed
PhIP alone,” says Nelson. “This provides even more evidence that eating vegetables may protect against cancer-causing agents like those in overcooked
meats.” There is a twist to the story: Food safety pays off, too.
Nelson, along with De Marzo and scientist Karen Sfanos, Ph.D., has also explored the idea that prostate cancer may involve a combination of “environmental insults” – bad things in the diet, plus something else that weakens the body, like an infection. They wondered whether chronic inflammation, caused by bacterial infection, would make a difference in rats that had consumed PhIP. Using a specific strain of E.coli isolated from a patient with chronic prostatitis/chronic pelvic pain syndrome, they found to their surprise that the charred food plus the nasty bug seemed to have a systemic effect.

Together, E.coli and PhIP caused an increase in the development and progression of cancer in the skin and digestive tract. (Note: many people have E.coli in their gut and it is harmless, but some strains can get into meat when it’s processed and can survive if the meat is undercooked.) The rats that received the double punch of E.coli plus PhIP fared worse than rats that ate the PhIP alone. In one study, the bacteria- and PhIP-consuming rats developed more precancerous lesions within the prostate and might have developed even more problems – except they also died sooner.

In further experiments, they found that “when we inoculated PhIP-fed rats with E.coli in the prostate, the animals developed acute and chronic
prostate inflammation out of proportion to that seen with PhIP ingestion or E.coli inoculation alone, and had more prostate neoplasms, intestinal
cancers, and skin cancers,” says Nelson. “This hints that prostate infections and dietary carcinogens might interact to promote chronic prostate
inflammation and prostate cancers, and that prostate infections might augment carcinogen effects on other tissues, as well.”

What does this mean for you? One, that if these things cause changes in the prostate, it’s a pretty good bet that they are hurting you elsewhere, as well,
so take precautions: eat a veggie in addition to a potato. Potatoes are delicious, but they don’t help fight cancer the way green, leafy vegetables and
tomatoes do. Two, tomatoes and broccoli probably aren’t the only vegetables that can help diffuse the bad effects of charred meat; these are just the ones
that were studied in this particular investigation. Three, don’t eat undercooked meat. You’re not just risking food poisoning, which comes in like a
freight train and goes away quickly; you may be adding to your risk of developing cancer.

Nelson, along with De Marzo, Sfanos, and Hopkins colleagues recently published two papers on these striking new findings in the journals PLoS ONE
and Cancer Prevention Research.

Prostate Cancer Screening and You