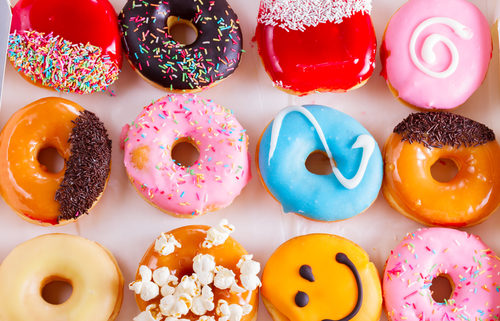 In 1993, I actually wrote that sugar and carbs were fine. Want to be healthy? Eat more pasta and healthy grains, I wrote. Fats were the big evil. I was so wrong – but this was what the studies showed. This is what many doctors believed. Fat was our enemy. Fat was the reason we were becoming – not nearly so much as we are now, I might add – a nation of lard butts.

For decades, this was reflected in packaged “healthy” foods. Eat as many cookies as you want: yes, they’re chock full of carbs and junk calories, but no worries! They’re LOW FAT. This was the new food gospel, and we saw it proclaimed on our grocery store shelves – low-fat chips, ice cream, cakes. Guilt-free! Breakfast cereal – great! It’s got NO FAT! We saw the birth of olestra, which not only had no fat – it was indigestible! Side effects included gas, cramps, bloating, diarrhea, and, most appalling of all, “anal leakage.” Lays potato chips, Ruffles, and Doritos at the time that were “FAT FREE” and contained olestra had the word “WOW” in huge letters right there on the bag. I guess they meant the taste, but maybe they were referring to what happened when you ate it, as in: “Wow! I just pooped my brains out!”

In 1967, Nancy Sinatra had a hit song called “Sugartown.” She sang, “I got some troubles, but they won’t last. I’m gonna lay right down here in the grass, and pretty soon all my troubles will pass” (most likely, she did not mean “pass” in the olestra way) “ ‘Cause I’m in shoo-shoo-shoo, shoo-shoo-shoo, Sugar Town.” There were about five more “shoos” in that line, but you get the drift.

Sugartown was the place to be. We believed it because of review articles like one that appeared in the New England Journal of Medicine (NEJM) the same year as “Sugartown” – 1967. It discounted evidence that linked sucrose consumption to coronary heart disease. Doctors believed it. They told their patients. Their patients believed them.

It turns out that this particular study was secretly funded by the Sugar Research Foundation (SRF). Now we know, thanks to a bombshell article recently published by University of California-San Francisco scientists in the journal, PLoS Biology, that the SRF (now defunct) was completely evil. It manipulated the science.

It not only “discounted evidence linking sucrose consumption to blood lipid levels and hence coronary heart disease,” report the study’s authors, Cristin Kearns, Dorie Apollonio, and Stanton Glantz. It also “withheld information from the public” linking sugar to changes in the microbiome that can lead to bladder cancer.

But it’s not just the SRF, which later became the International Sugar Research Foundation (ISRF); it’s a bunch of sugar industry trade associations. And it wasn’t just back in the 1960s. All of these groups have “consistently denied that sucrose has any metabolic effects related to chronic disease beyond its caloric effects,” Kearns, Apollonio and Glantz state. In other words, the main side effect these groups are willing to acknowledge is that sugar makes you gain weight.

Let’s take a moment here for me to say that I love sugar. I do. I love cookies, and chocolate cake, and coconut custard pie, and Mexican Coke with real cane sugar instead of corn syrup.  But I really limit it.  I don’t like food Nazis, who tend to be snarky and condescending and who alienate people who really could benefit from what they’re trying to say by making snide statements like, “What’s next, a deep fried stick of butter?” (I actually read that this week in a nutrition magazine that means well, but its tone is so snotty that it’s off-putting.)

That’s not what I’m trying to do at all. What I’m writing about here is the disturbing idea that sugar has been linked to serious illnesses and that the sugar industry has suppressed this information. If we had known six decades ago, maybe a lot more people would be alive now, and maybe our country wouldn’t be struggling so hard with obesity, heart disease, and diabetes.

In case you’re wondering, Kearns, D.D.S., M.B.A., is an assistant professor at the University of California San Francisco (UCSF) School of Dentistry. Stanton Glantz, Ph.D., is Distinguished Professor of Tobacco Control in the Department of Medicine at UCSF. He’s seen this same kind of twisting and distorting of medical evidence a lot; the tobacco industry did it for years. Dorie Apollonio, Ph.D., is an associate professor in the Department of Clinical Pharmacy at UCSF. Together, these UCSF researchers make a formidable team.

Now, back to the 60 years of manipulating the science and hiding the harmful effects of too much sugar. As recently as 2016, the Sugar Association issued a press release blasting findings from a study published in Cancer Research. In that study, done in mice, scientists found that dietary sugar induces increased tumor growth and metastasis when compared to a non-sugar starch diet. But instead of saying, “Hey, you know, maybe you might want to consider not eating so much sugar – all things in moderation,” the Sugar Association doubled down, stating that “no credible link between ingested sugars and cancer has been established.” Nothing to see here, move along, move along. Look over there – doughnuts with sprinkles!

In this PLoS paper, the UCSF scientists lay out a trail of damning evidence. In that first project in the 1960s, one group of rats was given a diet of 75 percent fat but no sugar. A second group of rats ate a diet of less fat, just 15 percent, but 60 percent sucrose, and their little bodies metabolized all that sugar as a carbohydrate. The sugar-eating rats developed thiamine deficiency, which then led to heart failure. But in the rats that ate more complex carbohydrates and no sugar, the gut bacteria, or microbiome, changed and actually started synthesizing thiamine.

This study intrigued SRF scientists, who thought that maybe, if the microbiome could be adjusted, the gut could tolerate sugar better. This idea led to Project 259, in which scientists led by W.F.R. Pover at the University of Birmingham in the UK studied the effect of sugar in the gut between 1967 and 1971. Pover’s team showed, in rats and guinea pigs, that eating more sugar led to higher levels of triglycerides; in turn, this led to higher levels of beta-glucoronidase in urine – a finding that’s linked to bladder cancer – and in an internal document, scientists described this research as “one of the first demonstrations of a biological difference” between rats that eat a lot of sugar and rats that don’t.

Project 259 didn’t just link sugar consumption to cancer, but to hypertriglyceridemia, an elevated level of triclycerides (a type of fat) that raises the risk of heart disease, say the UCSF scientists, and these findings stayed hidden for decades until the UCSF scientists uncovered them. Also suppressed was evidence linking higher doses of sugar to other “renal disorders, urinary tract infections, and renal transplant rejection.” Eat sugar – reject your donor kidney!

Even worse, the sugar industry did what every good magician knows how to do: misdirect. In previous research, published in the Journal of the American Medical Association (JAMA), Glantz and Kearns, with colleague Laura Schmidt, examined SRF internal documents and historical reports and found that the SRF secretly funded studies, including one published in 1965 in the NEJM, “promoting fat as the dietary culprit in coronary heart disease.”

Imagine there’s a gunshot, and the killer quickly places the murder weapon in somebody else’s hands and starts shouting, “He did it! It’s that guy!” and then slinks away. That’s what the sugar industry did.

For six decades, we have blamed fat – and as a society, we now look more and more like the tubby earthlings on the big spaceship in the Pixar movie, “Wall-e.” We’re huge, and we’re unhealthy.

Sugartown is not so sweet.