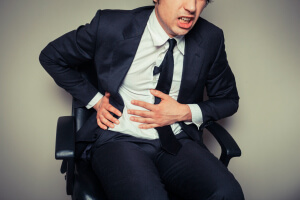 Ever had a gut feeling?  Felt butterflies in your stomach?  Maybe gotten a little crampy or needed to make an emergency trip to the bathroom during times of stress?

Now, let’s look at this from the other end, so to speak:  Maybe you’ve been feeling anxious or depressed.   Maybe you feel bad, and you don’t know why.  Maybe something in your diet is making you feel this way.

Maybe what you eat is making you sick.

There is an intimate, intricate link between the brain and the gut that scientists are just beginning to understand.  Questions are being asked and investigated that, frankly, nobody thought of even a few years ago, because the connections weren’t there yet.  That is changing.

[Tweet “There is an intimate, intricate link between the brain and the gut that scientists are just beginning to understand.”]

Here are some fun facts you should know about what scientists call the gut-brain axis:

Am I saying you have celiac disease if bread gives you a belly ache? No, but bear with me:  One, a lot of people test negative for the disease itself, but notice they feel bad when they eat bread or pasta.  They feel bloated, maybe a little cranky; maybe they also get headaches.  They also feel better when they eliminate gluten from their diet.  They may have gluten intolerance, which is not the same as celiac disease, but responds well to a change in diet.  Two:  People with celiac disease who give up gluten notice a lot of other changes in their lives.  They may put on muscle mass, because their body was starving from the inside; no matter how much they ate, they weren’t absorbing the good nutrients, because their small intestines didn’t function right.  They also tend to realize, with great surprise, that they have felt bad for years; they just didn’t know why.  And here’s the kicker: Their mood improves.

Celiac disease can cause depression, irritability, and anxiety, but can get better with a diet change.

What I want you to think about is this:  If it can happen with one gut disease, it can happen in other problems involving the gut and/or diet.  Food affects mood.  Maybe you have a food allergy or intolerance that you didn’t know about.  The nerve cells in the gut affect your mood.  It’s the opposite of those ads for Las Vegas:  What happens in the gut does not necessarily stay in the gut.

“The gut has its own brain,” says Pankaj “Jay” Pasricha, M.D., gastroenterologist and neuroscientist, director of the Center for Digestive Diseases at Johns Hopkins Bayview Medical Center, and co-director of the new Johns Hopkins Food, Body & Mind Center.  At this center, the science is a fusion: it’s Gastroenterology, Neuroscience, Microbiology, Immunology, and Psychiatry.  They’ve got a bunch of doctors and scientists working together to figure out just how important a role the gut plays in diseases that seem like they wouldn’t trouble the intestines – diabetes, heart disease, depression, anxiety, even cancer.

I have interviewed Jay Pasricha several times for the Johns Hopkins Center for Innovative Medicine’s magazine, Breakthrough.  At the Center, he says, many of their patients come to them by way of a rather long road.  Basically, they’ve been through a lot — medicines that may not have worked, for example, or doctors who may have addressed one of their problems without realizing the whole body was involved.  Pasricha told me that his research involves multiple aspects of the gut-brain axis.  He is very interested in the pancreas, in exploring “how the gut can be a signal that drives metabolic disease,” he says, and “finding the mechanism by which gastric bypass surgery relieves insulin resistance and diabetes.” Pasricha has also shown in mouse models of diabetes that there is remodeling of the enteric nerves that help control insulin production; he believes that a new approach to treating diabetes — by changing the way the nerves signal to each other — may be on the horizon.

Exactly how the brain in the gut relates to the “big brain” is what Pasricha and his colleagues are working hard to find out, testing the potential of never-before-recognized molecular targets for treatment of nausea, abdominal pain, and other symptoms that may arise when mind-gut pathways go awry.   “The treatment of motility disorders (like irritable bowel disease and gastroparesis) really requires the art as well as the science of medicine, because every patient responds differently,” notes Pasricha.  “In fact, there are very few effective treatments, and what works for one person might not be very helpful for another,” which is why he believes that entirely new avenues of treatment might make a huge difference in care.

But better treatment for motility disorders is most likely just the tip of the gut-brain iceberg, Pasricha believes. The enteric nerves almost certainly play a role in obesity, diabetes, in pancreatitis; they may even be involved in Alzheimer’s disease, some forms of cancer, and other diseases that aren’t usually thought of as relating to the gut.

These nerves are involved in immune responses, he explains, “and this process, called neurogenic inflammation, is a problem in many disabling diseases.” Signals from the enteric nervous system affect metabolism in the brain, liver, and elsewhere.  “The bigger picture here is enormous.”

Next: Bacteria in your gut, good and bad.